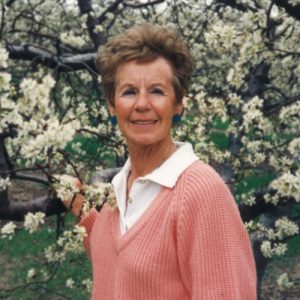 It is with sadness that the family of Irene Claggett announce her peaceful passing on Friday, April 22, 2022, in the Kelowna General Hospital, at the age of 93, with her husband by her side.

Irene is survived by her husband Fred Glynn; son Jim Claggett (Janice); granddaughter Taryn (Nick); grandson Evan; sister Elaine Phillip; and numerous nieces and nephews. Irene was predeceased by her parents Leonard and Grace O’Byrne of Wilcox, Saskatchewan; her first husband Bus; her daughter Brenda Claggett of Winnipeg; and by seven of her siblings.

Irene was born and raised on a family farm near Wilcox, Sask, having four sisters and four brothers. She attended school locally at the Notre Dame College, then began training to be a nurse at the Regina Grey Nuns Hospital, graduating as a Registered Nurse. Thus began a fulfilling career with positions throughout Saskatchewan and Manitoba.

Irene married Bus Claggett in 1952, lived in Winnipeg, moved to Flin Flon for a few years and then returned to Winnipeg where she spent most of her working life. She and Bus had two wonderful children, daughter Brenda, and son Jim. Sadly, Irene’s husband Bus and her daughter Brenda predeceased her.

When Irene retired from nursing, she moved to Kelowna, BC in 1994 to be near two of her sisters. She settled in to retirement and took in most of what the Okanagan lifestyle had to offer. She was an ardent member of several golf courses and of the curling club. She met Fred Glynn, and remarried in 1998. She continued to be very active, enjoying symphony concerts, the Actors Studio, BBQ’s, biking, the parks, and being outdoors in general.

Irene’s health began to deteriorate a few years ago, and she spent the last five months in the Mountainview Long Term Care home. She was a special, out-going lady, and will be greatly missed by all who knew her. Irene’s family would like to thank the staff at Mountainview, your care and compassion are deeply appreciated.

In lieu of flowers, donations may be made to the Alzheimer Society of Canada, alzheimer.ca, or the Terry Fox Foundation, terryfox.org.


The service for UPDATED SERVICE INFO – CLAGGETT, Irene Frances is scheduled for THURSDAY, JUNE 16, 2022, at 10:30 AM (PDT). Below you will find the map for the service location and the contact information should you have any questions.