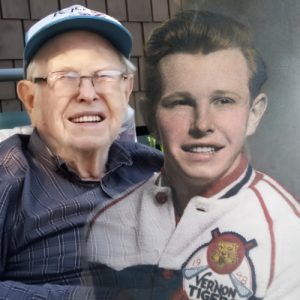 Harold Cummings, 92, died peacefully on December 27, 2021. His life was marked with kindness, humour, and patience.

Born in Salmon Arm, BC, in January 1929, his parents Albert Cummings and Sylvia (née Harper) raised him in the Okanagan Valley, Harold was active in sports. He grew up playing Hockey and played Lacrosse for the Vernon Tigers in 1948.

In 1954, he moved to Vancouver and was blessed to marry his childhood sweetheart, Lorene June (née McKay) in 1959. He went to work for B.C. Tel and helped raise four children in North Vancouver, BC. In those early years he was a Grand Mason in the Masonic Lodge. He continued to play hockey, winning the senior Olympic’s championship in Anaheim, CA. Harold enjoyed coaching both hockey and Lacrosse in North Vancouver and mentored many young men in the game. He took up gardening, and in the summers spent time at the family cabin on Shuswap Lake, where he welcomed many cousins and extended family to enjoy. In 1986, he retired to Kelowna, BC.

Harold’s legacy of love and generosity will be carried on by his family: his children Greg and the twins Barry & Brenda; his grandchildren Marley, Kingston, Maximilian, Ryan, Ross, Sealynn, and Raeanne; and his great-grandson Bruce Harold; as well as his large extended family in Salmon Arm. He will be missed deeply and remembered often.

To honour Harold, there will be a Celebration of Life held later in the Spring.