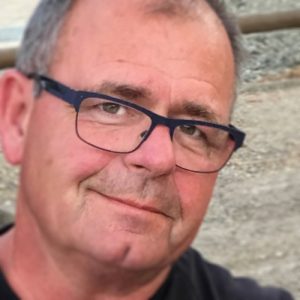 On July 11th, 2022, Heaven gained an incredible angel with the loss of the heart of our family, Marvin Dale Didyk. He was a beloved husband, adored father, idolized “Geido”, cherished son, brother, and friend to everyone who was lucky enough to know him, and the kind of person this world needs more of. Marv was only 63 and left this world far too soon. Our hearts are broken.

Marvin was born February 5, 1959, in Spirit River, Alberta. He grew up in Abbotsford, BC. He founded Unique Homes, Inc. at 16, and over the next 45 years built hundreds of homes in Abbotsford, Mission, Kelowna and other cities – for which he won many regional and provincial awards. Often when his houses are re-sold, they are touted as “Didyk” homes – his name became synonymous with quality and excellence. Thousands of people wake up each morning, send their kids to school, enjoy family dinners, and sleep assured of their safety each night – all because of Marv.

Marvin built more than homes – he built relationships. If you were ever lucky enough to be Marv’s neighbour, you often woke up to find your driveway cleared of snow in the winter, or you were handed freshly grown fruit and vegetables over the fence in the summer. If you were ever fortunate enough to be invited to the annual Didyk crabbing trip in La Conner, you learned to bring a large cooler, because you would always return home loaded with fresh crab.

Beyond all of Marvin’s accomplishments, his greatest pride was his family. At 21, his future brother-in-law Larry set him up on the blind date that changed his life. Marvin met Marina, his soulmate – evidenced not only by their love for each other but also in their names… “Marina” means “of the sea” and “Marvin” means “lover of the sea”. Later that same year, they were married. In 1981, they welcomed Michael, and Crista followed two years later. Crista married Nathan, and soon after Marvin became a “Geido” to Lena (11) and Nate (9). After Michael married Vanessa, he became a Geido again with the arrival of Shea (4) and Ashe (2). Marvin is also survived by his parents Mike and Doris; by his siblings Doreen (Randy), Debbie (Brian), and Melvin (Tracey); by his best friend Larry and sister-in-law Caroline; and by dozens of extended family members and countless friends and respected colleagues.

As a grandfather (“Geido”), he has given his grandchildren a masterclass in humility, kindness, hard work and… gardening! He was always up for a dance break in the kitchen and was known for his hearty belly laughs. He somehow ensured Santa visited each year at Christmas – although he never seemed to be around when he arrived. He understood that to truly connect to his grandchild, it was important to get down on their level – so he would often be down on the floor playing with trucks or building elaborate Lego structures. Geido loved a good project, and taught us all to take pride in what we do and to do things right the first time – that “good enough” was not good enough.

Marvin’s Celebration of Life will be live streamed on Sunday, September 18, 2022. If you would like information about how to participate, please visit https://bit.ly/marvindidyk.

Location
For information on how to participate in the Celebration of Life please visit: https://bit.ly/marvindidyk.


The service for DIDYK, Marvin is scheduled for Sunday, September 18, 2022. Below you will find the map for the service location and the contact information should you have any questions.

For information on how to participate in the Celebration of Life please visit: https://bit.ly/marvindidyk.