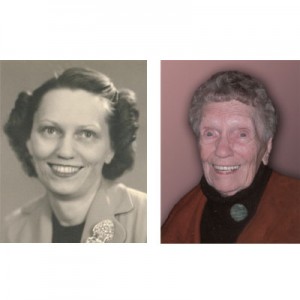 It is with great sadness that we announce the passing of Gertrude Margaret Dobbins at Kelowna, British Columbia, Canada at the age of 94. She was fondly known as “Trudy” and will be greatly missed by her family and many friends. She is survived by her son David Dobbins of Henderson Nevada, her daughters Rosemary Nash of Huntley, Illinois, Barbara Ann Wastrodowski of Kelowna, British Columbia and multiple grandchildren and great-grandchildren. She was predeceased by her husband John Samuel and daughter Jacqueline Louise Sipe of Winchester, Indiana.

Trudy was born in Pittsburgh Pennsylvania on June 27, 1917 to Frank and Margaret Boucek in Pittsburgh, Pennsylvania and grew up with her three brothers Bob, Bill and her twin brother George. She met John Samuel Dobbins in Pittsburgh and married in March 17th, 1945. Jack and Trudy lived for their children and extended family. There was not a day of their happy lives that they did not put their family first and they were extremely proud of their accomplishments in life. Later in life they travelled extensively and lived in many cities throughout the USA and finally settling in Henderson, Nevada. Sadly, Jack passed in 2002 and Trudy completed their plans to move to Canada in 2002 where in 2005 Trudy became a Canadian citizen at the age of 88.

Trudy loved to travel and see the world. Her travels took her to The Holy Lands, Europe, Hawaii, Alaska and Mexico. She realized her dream in 2004 to see the Caribbean and transit the Panama Canal.

Trudy’s smile and infectious whit will be missed and her memory will live on with family and her many friends though out North America. Special thanks to the staff at Sutherland Hills Rest Home for their loving care of our mother and friend Trudy.

Prayers was held at Springfield Funeral Home in Kelowna, BC Canada on Monday, March 19th at 7:00 pm.  Mass at will be celebrated on Tuesday, March 20that 11:00 am at St. Charles Garnier Parish, 3645 Benvoulin Road, Kelowna, BC.  A visitation will be held at Devlin’s Funeral Home in Pittsburgh PA on Friday, March 23rd from 2:00 to 4:00 pm and 6:00 to 8:00 pm.  Mass of Christian Burial on Saturday, March 24th at 10:00 am at St. Teresa of Avila Church, 1000 Avila Court, Pittsburgh, PA, followed by interment at Allegheny County Memorial Park Cemetery.

The prayer service for Dobbins, Gertrude (Trudy) Margaret is scheduled for Monday, March 19, 2012 at 7:00 pm at located at 2020 Springfield Road, Kelowna, BC.


The service for Dobbins, Gertrude (Trudy) Margaret is scheduled for Tuesday, March 20th at 11:00 am . Below you will find the map for the service location and the contact information should you have any questions.