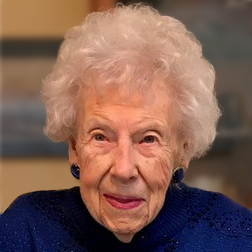 Doris Amy Christine Drayton, at the age of 107, died at home in Kelowna, BC on July 26, 2020, with her daughter beside her, as was their wish. She leaves behind her daughter Penny Venables of Kelowna; grandchildren Lissa, Kevin (Rhonda), and Melanie (Keith); great-grandchild Raeleigh; and great-great-grandchildren Sierra, Savanna, and Shay. She is also survived by her nieces and nephews: Carolyn, Peggy (Jerry), Linda, Jim (Margo) and Bill and their families; as well as her very special friends Helen and Linda whom she considered her “other” daughters. Those who went before Doris include her much loved husband, Bill; daughter Joanne; parents Swan and Amy Nelson; sisters Helen (Glenn) and Margaret(Ray); great-grandchildren Shara and Seron; and her special friend Bob Harkness.

Born in Moose Jaw, SK, she spent her childhood sharing a full and interesting family life with 2 younger sisters on the family farm in Tugaske. The entire family contracted and survived the Spanish Flu in 1918, so she has now experienced 2 pandemics which she would have noted would “look good in her memoirs,” which she kept daily for almost 90 years.

Her mother had contracted TB when the children were young and spent long periods away from the family in a sanatorium in Minnesota. She died when Doris was 13, however had obviously instilled a great love of literature and education in her children. Doris’s desire to be a teacher was evident at a very young age as she excelled in her studies and at mentoring and story-telling to her sisters and her school friends. Her scholastic successes continued through her pursuit of her teaching career, and she would ultimately teach in one room schools in small towns in SK and spent 2 exciting years tutoring 4 children on a ranch in Southern AB, where she became an excellent horseback rider, a love and skill she passed on to children and grandchildren.

She always found great beauty in the prairies but it was the mountains of BC that became the vistas she would love for the rest of her life. When moving to Vancouver in the 40s she met and married her life partner, Bill, and they would be married for almost 50 years. Their first daughter, Joanne, was born in Vancouver and then Penny followed 2 years later after they had moved to the beautiful Kootenay town of Kaslo where she lived for the next 61 years in the shadow of Mt. Loki and the surrounding majestic mountains, until at 94, she moved to live with Penny in Kelowna.

Family was a central focus as she was blessed with 3 generations of grandchildren, and she always took great interest in encouraging them in their studies. Education continued to be a driving force as she remained a substitute teacher until mandatory retirement at 65, much to the dismay of students and colleagues alike. Through her great love of literature, coupled with her passion for teaching, she was instrumental in the revitalization of the Kaslo Public Library in 1953 and remained on the Board and as a librarian for decades.

She and her husband were active in the life of the community with Doris being involved with hospital and church auxiliaries, PTA, social and cultural events, golf and curling, and she was always willing to host and organize with her inimitable grace, and style.  Her husband was Mayor for many years as well as the Provincial Magistrate, and since their home was a heritage Lodge, she often had the opportunity to extend her gracious hospitality to many guests including BC Premiers, and Lt. Governor and a member of the Group of Seven.

She had an inexhaustible interest in life and was often noted to be one who until very late in life always “lived in the present”. She remained a consummate reader and ultimately, when her sight diminished, a listener, through audio books and then the voices of friends and family who read to her. That she had taught Latin and loved the language and had been such a voracious reader made her a formidable Scrabble player, and she was a New York Times crossword expert – still offering obscure answers even in her last days. She was delighted with Google and was so pleased to be able to “ask” for poems and songs based on the lines she recalled.

Her interest in the lives of those she encountered resulted in her being willing to try anything, the more exciting the better – from motorcycles to dune buggies to helicopters – she would enjoy them all – with the highlight being zip-lining in Hawaii to celebrate her 100th birthday!

Her faith, love of family and friends, and stoical Swedish heritage sustained her through the untimely deaths of her own mother, her daughter and 2 great-grandchildren all at very young ages. She was blessed with being able to have a positive impact on most everyone she met throughout her life, and that her name means “gift” is very true, for she was that… always.

The family wishes to acknowledge the compassionate care administered by Dr. D. Obedkoff who considered her a “national treasure”; and the wonderfully attentive and loving staff of the Adult Day Care Program at Hawthorne Park, which she attended for over 10 years, always referring to it as “Playschool”. They are also so grateful for the friendship bestowed on her by the myriad of close friends of all ages who have always shown her such loving care and attention.

A Private Family Graveside Service in Kaslo, BC will be held in early September. A Memorial Service at The Cathedral Church of St. Michael and All Angels in Kelowna will also be held at an undetermined date.

Should family and friends so desire, memorial donations may be made to: The Cathedral Church of St. Michael and All Angels, Kelowna BC; The Kaslo and District Public Library, Kaslo, BC; or Covenant House, Vancouver, BC, admin@covenanthousebc.org.

Send Condolences
Send Flowers or a Sympathy Card
The Cathedral Church of St. Michael and All Angels, Kelowna BC; The Kaslo and District Public Library, Kaslo, BC; or Covenant House, Vancouver, BC Link: admin@covenanthousebc.org