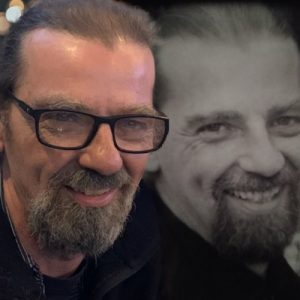 Kevin wasn’t feeling well when he returned from Mexico in November 2021. His devoted partner Lorri Davidson grew increasingly concerned and took him to the hospital on December 27, 2021. The doctors stabilized him, but the results of the tests were brutal: he had a rare and aggressive neuroendocrine cancer that had spread from his lungs to his pancreas and other internal organs. It was too late. There was nothing they could do but make him comfortable. We were shocked at how fast his condition deteriorated. Lorri stayed with him in the hospital night and day until he succumbed to the cancer on January 12, 2022. They had been planning a life together.  Our hearts are broken.

Kevin was adventurous and confident, and he was proud of his mechanical skills. He could fix anything, usually much quicker than you expected. He would build or repair anything for you for the simple pleasure of seeing you impressed with his work. He worked hard, in difficult and sometimes dirty jobs that others wouldn’t do. He was proud of his polishing shop at Northside Industries.

Kevin lived life to the fullest. He will be greatly missed by those closest to him: his beloved Lorri Davidson; his mother, Evelyn Adams; his stepfather, Ron Adams; his sister, Michelle McElroy; as well as by his many friends and neighbours.
~Ron Adams

Kevin, you amazed me and not a day that comes or goes will ever change that. Loving you was a privilege that I will honour for the rest of my life, there aren’t enough words in all the world to describe our love story. You honestly said it best when you said, “We had made a lifetime of love in the time we did have together”.

My Yosemite Sam, you taught me to love again. You brought me peace and healing, you shared your dreams and love. And, more than anything, we showed each other that unconditional love still exists.

I will love you forever.
~Lorri

A Memorial Service will be held at a later date, when it is easier to gather.