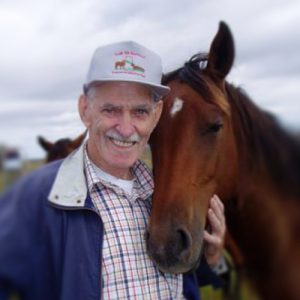 Ben Eldridge was born December 9, 1927, in Falmouth, Nova Scotia, one of 14 children born to Frank and Rebecca Eldridge.  He grew up on a farm and orchard in the Annapolis Valley and learned how to raise animals, plant crops, log, work with a team of horses, and repair anything that broke down or fell apart.  He made a fortuitous decision in 1950 and traveled to Saskatchewan to work on a threshing crew.  He made another fortuitous decision when he went to a Cow and Calf Show, and people told him he needed to meet “the new teacher.”  A life-long love began soon after he saw Merle Prouse, the new teacher, walk into the barn with the sunlight glowing behind her. They were married December 1, 1951.  Over the next 15 years, they moved west to Kelowna, BC, and had five children along the way: Gloria (husband, Jim Fitterling), Karen (husband, Melvin Campbell), Terry (wife, Laurie Eldridge), Nancy (husband, Patrick Lerner), and Gayle (husband, Garry Klammer). They were blessed with ten grandchildren: Ben, Melvin, and Mathew Campbell, Leigh and Dale Eldridge, Katie and Ava Lerner, Lauren and Darrell Klammer, and Noah Lerner, who preceded Ben and Merle into heaven in February 1998.  They also have four great-grandchildren: Ethan, Aria, Daniel, and Clare.

Although Ben’s education was interrupted in Grade 8 when his older brothers went into the Navy in WWII, he valued learning and took every opportunity for more education and more training.  He started his career as a farm hand, became a journeyman mechanic, and retired as Director of Vocational Programming at Cariboo College in Kamloops, BC, where he opened many doors to training and work for young people all over Northern BC.  After his retirement, he spent some years prospecting with his son, Terry, and then set down to the serious business of retirement, which meant, for him, always having something to plan, build, fix, and create.  There was nothing (it seemed) that Ben couldn’t build or fix or invent if it needed to be built, fixed, or invented.

Ben left many legacies for his family.  One great legacy is the cabin at Crooked Lake, which he and the family built by hand from salvaged lumber and logs harvested and milled on the property.  He and Merle spent a great deal of time at the cabin, with one another, and with their children and their children’s children and their children’s friends.  The cabin was, and is, a magnet for family and friends to spend time together.  Another tangible legacy is his woodwork.  Ben was a skilled woodworker and his family and friends have been graced over the years with his handiwork, beautiful wooden furniture and artifacts, all made by hand and all cherished by the people who now own them.  His intangible legacies are his love for family and his respect for education.  Ben and Merle together showed what love of family looked like.

Ben died peacefully at Okanagan Hospice on September 5, 2021, surrounded by family and love.  The family thank the staff at the Village at Mill Creek, who were so loving and good to Dad all the years he lived there, and especially in the almost two years since Mom died.  We also thank the staff at Okanagan Hospice for caring for Dad so compassionately in his last few days.

In lieu of flowers, donations may be made to COHA (Central Okanagan Hospice Association).