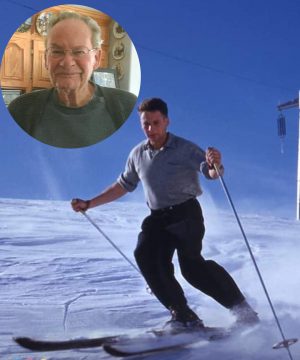 Robert “Bob” Estabrooks passed away peacefully on September 6, 2020, at 2:30 pm he is survived by his wife of 58 years, Elli.  He will be greatly missed by his children Michael (Leanne), Bill (Michelle), Brian (Janice) and Sandy (Ernie); his grandchildren Daniel (Yessi), Christopher (Tricia), Brandon (Sarah), Jamie (Shawn), Ryanne (Brett), Jenna (George) and Courtney; his great-grandchildren Carson, Jeffrey, Mason, Aspen, Ryder, Jaxon, Kylee, Emrie, Thomas, Carter, Arlow and his namesake Robert (B).  He is survived by many siblings.

Bob worked for Alcan Power Operations in the Early 1950s first at Kildala Pass and Kemano, he was also responsible for monitoring maintenance at Kenney Dam.  Later from Kitimat, he would work on a joint project with Alcan and Fisheries at Morice River as well as recording water levels and snowpack levels in the Ootsa Reservoir.  Summers would see the whole family turn up to spend time together, it is one of the fondest memories all of us kids share to this day.  Dad was an extreme skier before it was popular, he was an environmentalist doing his part by scuba diving and retrieving lures from lakes nearby.  He retired from Alcan after 32 years of service.

Bob was able to retire at the ripe old age of 49 in 1980 and the entire family moved to 100 Mile House to a farm where Bob was raised.  In 1993, Bob and Elli would make one more move to Peachland, BC.  The neighbourhood welcomed them and became a second family to them.  It was there that he truly got to experience retirement… because let’s face it farm life is not easy. He loved fishing, hunting, and his entire family.

Most of you would know him as a quiet man with a quick sarcastic whit.  He did not say much, but when he did we all paid attention.

There will be no service by request. Instead, there will be a private spreading of his remains next summer at his “favourite fishing camp”.  In lieu of flowers, please make a donation in Bob’s memory to a charity of your choice.