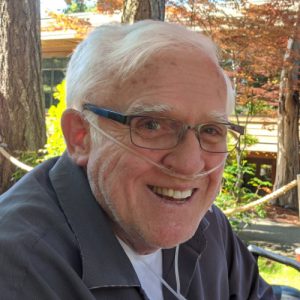 David passed away on January 4, 2021, at the age of 77 years after a courageous battle with Asbestosis. He leaves behind his loving wife of 35 years, Carol Eamer; his son Mark Andrew Fergus in Airdrie, AB; and his granddaughter Madisyn Helena Genovy-Fergus of Airdrie, AB; as well as his sister Sally Giesbrecht of Laird, SK; and his brother Bruce J. Fergus of Nanaimo, BC. He was predeceased by his sister Patricia Fergus.

Born in Manchester, England, while his father was serving in the Canadian Armed Forces in Europe, my amazing husband had a fascinating life of travel and adventure from the very beginning. Sadly, Dave’s mother passed away when he was 4 months old and baby David was taken across the Atlantic to be raised by his grandparents in Winnipeg, MB until his father returned from the war. Subsequently, his father re-married and Dave’s brother and sisters were born after the family moved to Saskatoon, SK. Upon graduation from high school, Dave decided to go travelling and returned to England before going to New Zealand to work with his uncle, Don Fergus. Returning to Canada in 1970, Dave married his high-school sweetheart Dale Galbraith and continued to work in the insulation trade. Realizing that asbestos was impacting his lungs, Dave left the trade in 1981 and joined the OH&S Division of the Alberta Government. In 1985, Dave married Carol Eamer and became father to Mark. Dave was a wonderful, loving husband and father to Mark, of whom he was especially proud to see develop into an exceptional young man.

At Dave’s request there will be no funeral, a celebration of his life will be planned for later this year.

Dearly loved and missed by his wife, family and numerous friends and acquaintances in the OH&S world, Dave will always be remembered as a storyteller, an educator and a mentor. Forever in our hearts.