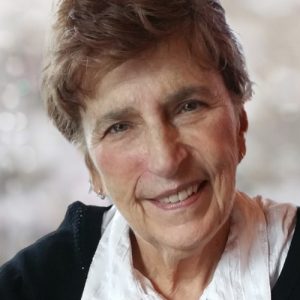 Jane Fleming died peacefully on Wednesday, January 19, 2022, at Missionwood – a time and place of her own choosing.

Jane was born in Hamilton, Ontario on February 5, 1945. Her father, Doug, was a most successful dentist in nearby Dundas.

Jane was predeceased by her parents, Dr J. Douglas H. Fleming – one time president of Canadian Lions Clubs – and Kathleen “Kaye” Ewen; and is survived by her brother John (Barbara) of Oakville, ON; sister, Mary (Larry Ricciardelli) of Hastings, ON; nephews Graham Fleming (Mary Scott) of Waterloo, ON and Miguel Ceron of Toronto, ON; niece Megan McCarthy (Sean) of Oakville, ON; and grandnieces Adair Scott-Fleming, Ava McCarthy, and Cian McCarthy.

Jane enjoyed a very happy, secure childhood in Dundas with weekends and holidays at the family pan-abode cabin on Felsman Bay, Parry Sound. Her education advanced without distinction until she arrived at university, where she discovered Geography – and flourished. Her Masters was completed with distinction at UBC.
In 1973, Jane arrived in Kelowna, BC as Regional and City Planner. After successfully breaking new ground in the Okanagan, she was head-hunted by the City of Edmonton, AB where she shone as General Manager of Planning, meeting and overcoming more than a little prejudice. In 1980, Canadian National Railways sought her out to be their General Manager of Real Estate for western Canada. A move to Vancouver, BC in 1985 brought her closer to her beloved Big White where she owned a unit in Greystokes.
Premier W. R. “Bill” Bennett appointed Jane to the Board of Directors for the Legal Services Society of B.C.; and she was appointed to the Board of Directors of YVR where she played a significant role in developing the superb international airport facility that we now enjoy.

Jane was always powerfully self-motivated, always confident in her decisions ranging from establishing her own consultancy, to investing in good property, and driving excellent cars. Since 1990, Jane has been dealing with chronic disease and increasing, incessant pain. Lyme disease was never resolved; and hypertension, fibro-myalgia, and numerous complex side effects complicated her life which was made as comfortable as possible within the excellent facilities at Missionwood, and the day-to-day support of several aides.

Jane was most happy to locate a happy spiritual home at the Cathedral Church of Saint Michael and All Angels in Kelowna, where the ministry of Dean Nissa Basbaum was inspirational. The love and care of many of the St Mike’s congregation have been a great blessing through the past decade.

The family is most grateful for the professional help and guidance of Dr Wendy Wickstrom and Dr Baldwin of the M.A.I.D. Program who did everything possible, and often more than expected, to make day-to-day life worth the living, and its termination a quiet, private blessing.

Funeral arrangements are entrusted to Springfield Funeral Home, and a Memorial Service will be conducted at St Michael’s Cathedral as soon as circumstances permit. A bursary to reward local female Geography students is being established in Jane’s name and memory. Contributions to this sustaining Jane Fleming Memorial Award would be greatly appreciated: Central Okanagan Bursary and Scholarship Society, 316 3001 Tutt Street, Kelowna. 250.861.4980 www.cobss.sd23.bc.ca.