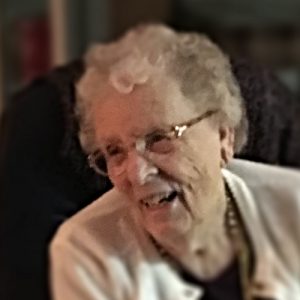 Mildred Sara Flintoft passed into spirit peacefully September 8, 2021, at the age of 101 years. She had been cared for by her children and grandchildren, and she was kept busy over the last few years with many calls from friends and family.

On August 5, 1920, Mildred was born. She grew up in Kelowna, BC where she was part of the early settler families; her father owned the Blackwood Livery Stable at the foot of Bernard Avenue. Such beginnings set the tone for the rest of her life, she worked hard at anything she undertook and raised a large family. Her fondest memories of her youth were riding her horse, Star, up to the top of Knox Mountain and enjoying picnics with friends.

Mildred met her husband, Lloyd, at a skating party on Munsons Pond; they married April 20, 1939 and spent 74 years together in Kelowna after the war. Often they wintered in Yuma, AZ and frequented Vegas, NV on many occasions after Lloyd retired. Mildred and Lloyd Flintoft were foster parents and gave many a child a home when in crisis.

An active member of the United Church, Mildred maintained her ladies group for decades. She had many talents as a craft person, often sewing and knitting gifts for her children and grandchildren, however it was her skill with training horses that was most notable. Somehow, she managed to design several of their homes from scratch and did much of the landscaping as well as completing the interior. Mildred frequented Chances casino and knew many of the staff and patrons whom she enjoyed talking with on her many visits over these last few years.