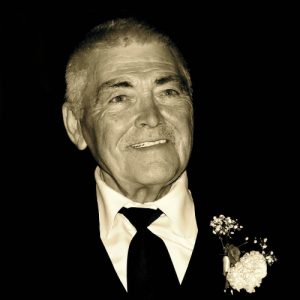 Clair Allan Foss went to be with the Lord on Thursday, December 10, at the age of 83 in Kelowna, BC.  While his passing was unexpected, Clair died peacefully in his sleep.

Clair was born in Tofield, Alberta, to father Arthur Marcus Foss, and mother, Clara Mary Foss.  He was the second oldest in a large family of five siblings consisting of his sister Arlene, and brothers Arthur, Roger, and Dale. Young Clair was a bright boy, always full of laughter and mischief. Clair started school at the nearby one-roomed Grand Forks school and later attended the Rutherford school.  There, he met one of his lifelong friends, Pete Muzyka, with whom he shared many laughs and hijinks over the years.

In his mid-twenties, he fell in love with Doris Girard. The two married, and they soon welcomed their daughter Lana into the world. Tragically, Doris passed away in 1967.

Clair dealt with his grief by travelling. Over the next few years, he travelled across Western Canada and the United States. Eventually, he travelled to Europe where he met a young British woman, Anne Harrison, on a boat headed to Sweden. He was immediately smitten and proceeded to sweep her off her feet. She had a young son, David, whom Clair immediately welcomed as his own. After only a year’s engagement, Clair and Anne were married, and settled down in Canada. Clair and Anne welcomed children Hannah, Marcus, and Sarah in the following years.

During his lifetime, Clair had many occupations. He was a Pipefitter with Local 488 in Alberta, owned a real estate company, was the leader of the Canada Party, and he was the president of the Canadian Action Party. But of all his jobs, he was proudest of being a father and grandfather.  Clair loved his family and friends deeply, and in return, he was loved by many.  He always had the ability to see the best in people and to make friends wherever he went.

Clair was preceded in death by his wife of 47 years, Anne Foss, who passed away April 24, 2020; his first wife Doris Foss, his brother Dale Foss, and his sister Arlene Moen.

A Celebration of Life will be held for Clair at Trondhjem Cemetery near his hometown of Camrose, AB at a later date.