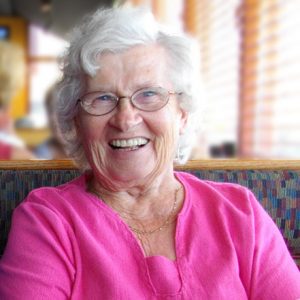 On Tuesday, August 27, 2019 Agnes Friesen, of Kelowna, passed away peacefully at the age of 84. Predeceased by her husband of 55 years Rudolf.  She will be lovingly remembered by, their son Tobi (Debbie); one surviving sibling Mary; and extended family and friends.

Agnes was born in the Ukraine and immigrated to Canada.  She made her home in Watrous, Saskatchewan and then moved to Winnipeg, Manitoba where she worked at Christie Biscuits.  While in Winnipeg she met Rudolf and after marrying they continued to live in Winnipeg.  Then in the early 1970’s the family moved to the Okanagan, first settling in Kelowna and then moving to Summerland to own an orchard.  In the 1980’s the family moved back to Kelowna where she continued to work as a cook at a Retirement home.  In 1993 Agnes retired and her retirement was filled with days of gardening, baking or canning all the fruits of the Okanagan.

Agnes will be remembered for chatting away with someone everywhere she would go and making them laugh in their conversation.

A Celebration of Life for both Rudolf and Agnes will be held Saturday, September 14, 2019 at 1:00 pm at Springfield Funeral Home, 2020 Springfield Road, Kelowna, BC. If you wish to send a condolence, post photos or share a memory, please scroll down the page to the area called “Condolences”.

THIS SERVICE WILL BE LIVESTREAMED SATURDAY SEPTEMBER 14, 2019 AT 1:00PM


The service for FRIESEN, Agnes is scheduled for Saturday, September 14, 2019 at 1:00 pm. Below you will find the map for the service location and the contact information should you have any questions.