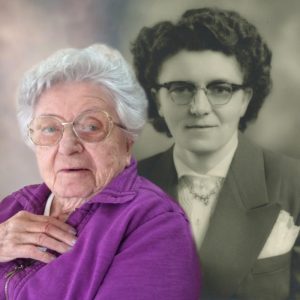 Mary was born in Steinau, Russia and was the second oldest of 15 children.  When she was 3 years old the family moved to Saskatchewan.  Life on the farm for mom meant helping with the inside work and looking after her younger brothers and sisters.  She attended school, finishing grade 8, and then attended Swift Current Bible School for 2 years.  In 1947 the family of 13 moved to Kelowna, BC.  Soon after arriving in Kelowna, her parents died leaving her and her brother Pete as the guardians of her younger brothers and sisters.  At that time, she also found time to have a job and be involved in the First Mennonite Church youth group where she met her future husband, Victor Friesen. They married in April 1954 and moved to Southern Ontario.  Dad worked at the Ford Motor Company in Oakville, and they lived in Burlington where they raised their 5 daughters. Dad had promised mom that they would move back to BC to be closer to family, that happened in July 1974.  They settled in Oyama and opened a shoe store in Vernon with the help of brother-in-law John Wiebe.  They also had shoe stores in Winfield and Kelowna.  In 1988, retirement began which involved volunteering at the MCC thrift store, sewing baby garments for third world countries in a ladies sewing group at church, travelling with friends around BC, and playing games in the evenings with friends.

Mom was a devoted wife and mother, and making a comfortable home for her family was important to her.  Because of dementia, she spent her last years at Sunpointe Village.  It was us who suffered in mom’s dementia and it has been a long goodbye.  Mom lived a contented life in dementia.  When you’d visit she would be reciting her favourite prayer or singing her favourite hymn in German all with a smile.  Her life demonstrated kindness and a love for Jesus.  We will miss you, Mom.  Many thanks to Sunpointe Village who cared for mom with compassion and kindness for the last 3 years of her life. Thank you Dr. Sebulsky for the care of both our mother and father.

A Graveside Service will be held to honour Mary, due to current restrictions it will be by invitation only. However, the family would like to invite all who want to pay their respects to join by Livestream on Friday, September 11, 2020 at 3:30 pm.