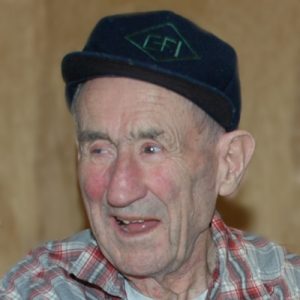 William “Bill” Gallagher passed away peacefully on January 20, 2020 with family by his side. He will be lovingly remembered and terribly missed by: his three daughters Donna Gallagher, Kathy Cherry and Brenda Gallagher, and his son, Brian Gallagher (Annelle); his grandchildren Russ (Amanda), Laurell (Clint), Corinna, Mathew, Nathen (Claudia) and Curtis; his great-grandchildren James (Jessica), Matthew, Kevin and Michael; his great-great-granddaughter Keena; his brothers John (Charlene) and Edward (Marj); and his many nieces and nephews. He was predeceased by Olive, his loving wife of 67 years, his brother Peter, sister Mary, and 3 grandsons.

Bill was born in Newburg, New Brunswick on the Gallagher homestead in 1930. His grandmother still lived there and when his mother died in 1941, she took on the responsibility of raising the 11-year-old “Billy” and his 4 younger siblings. He left home at a very young age and worked his way across Canada, eventually arriving in the Okanagan where he met his future wife. They married in 1952 and he lived out his life with her and their 4 children in BC. He was very much a “family man”, a very loving father and grandfather. An avid reader, he educated himself, as his formal schooling had been cut off early. He loved history and was great at crosswords and trivia, right to the end. He also loved the outdoors and enjoyed hiking, fishing and hunting. One of his most favourite places to be in the world was the family cabin at a lake in the East Kootenays, which he built himself.

He spent his career in the logging and lumber industry, winning many awards for his skills in lumber grading and first aid. In retirement he taught courses in sawmill mechanics at the local college. Bill was very extroverted and made friends out of strangers everywhere he went. He will be missed by many.

The family would like to thank the staff at Springfield Care Centre for the loving care they provided him.


The service for GALLAGHER, William “Bill” John is scheduled for Monday, January 27, 2020 at 11:00 am . Below you will find the map for the service location and the contact information should you have any questions.

In the Irish tradition, a wake will be held the day before, Sunday, January 26, at 1249 Pacific Avenue, beginning at 3:00 pm