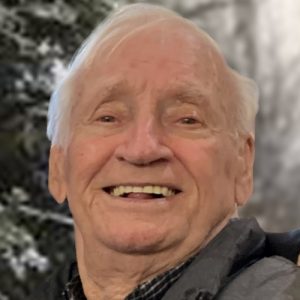 Roland Gaucher passed away on December 28, 2022, in West Kelowna, BC. He is survived by his loving sons Brian (Charlene) and Jordan (Kim): six grandchildren Jonathan, Brandon, Matthieu, Amera (Trevor), Dielle, and Brady; one great-grandchild Ariana Krilow; brother Leon (Eileen); and sisters Annette (Gary) Boyd and Lorainne (Terry) Woloschuk. He was predeceased by his wife, Elise, and his eldest son, Greg (Monica).

Roland was born in Coderre, Saskatchewan, on August 26, 1930. He came from a large French catholic family with eight brothers and sisters. At a young age, to earn extra money, he would set trap lines for furs, worked for the railroad, and helped out on the local farms. As a young man, he worked on a survey crew throughout Saskatchewan, where he eventually ended up in Rosetown,
where he was set up on a blind date and met his bride to be. They were married on August 23, 1958. In their early years of marriage, they lived in many places including Saskatchewan, Wyoming, California, Utah, and British Columbia, eventually retiring in Kelowna.

He was an avid hockey player in his youth and young adulthood and always enjoyed when his Montreal Canadians were playing. He was a jack-of-all-trades and loved to dabble around the house fixing everything and anything. He enjoyed gardening and sitting outside on the deck with a glass of homemade iced tea on his swing. He was a hardworking family man, loving husband, father, and grandfather, and a devout catholic. He was a soft-spoken man who always had a smile and story for everyone and will forever be missed.