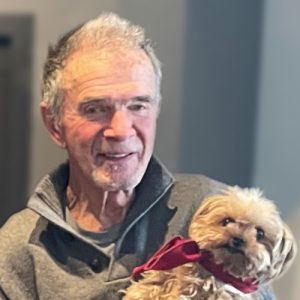 Floyd Gedak passed away on October 1, 2021, at the Kelowna General Hospital. He is survived by his loving wife of 65 years Darlynne and his beloved dog & faithful companion Joseph.

Floyd was born in Estevan, Saskatchewan to a family who emigrated from Constanta, Romania, and who then settled on a farm in the area. This was just before the drought of the 1930s when, like many farmers, they were forced to leave their farm.  Except for that very short period on the prairies, Floyd’s childhood was spent in Richmond, BC. There, he was involved in all sorts of activities, and was a typical boy, except for his numerous and serious childhood jobs: picking berries, delivering papers, walking horses and so on, as he was always very serious about making money and being responsible!

In Floyd’s early life he had a variety of jobs, he went from working at a shoe repair store (at the age of 16) to owning and running a very successful Building Construction and Contracting Business by the time he was 45.  He had a variety of jobs during the early years which, he said, also gave him many important skills as well as valuable experiences.

During Floyd’s construction career, he built a large Log House Restaurant in Prince George, BC, which he personally designed and then personally did a great deal of the construction work. The Interior was designed and decorated by his wife, Darlynne. Together, they ran the restaurant for a short period of time. Although he enjoyed the camaraderie with the numerous guests as well as the fun part of the business, he found that the creative part of building was more interesting, challenging, and rewarding; and so began his career of building numerous buildings. One was a large Professional Business Building in Mission, BC which was owned by him and his wife, which was stratified, and then each unit was sold.

Having met a Property Developer who was looking for someone of Floyd talents, he and the developer formed a relationship which led to numerous construction projects on the Sunshine Coast: A Hotel, a Staples Store, Three Condo Buildings, a  Hardware Store, a Residential House, and numerous other building projects. In Vancouver, working with this same developer he renovated a large amount of the Masonic Temple, as well as numerous renovations involving various office buildings, and doing a massive renovation involving the developer’s home. Projects that he did with his wife were more often building residential homes, which they sold, or home renovations for clients. All the above construction work was done between 1972 and 2014.

After retiring from his Construction Business, Floyd and Darlynne spent more time in the Palm Desert area of California, and it seemed wise to own their own home there. That led to the major renovation of a home in a Country Club, which they lived in for a few years, then selling it and repeating the procedure by renovating a larger home in an Indian Wells Country Club home. In 2010, they moved from the Vancouver Coast to the BC Interior, settling in Peachland, BC and three years later moving on to West Kelowna, BC.

Floyd loved sports, from watching sports to being involved – which he loved much more. Tennis was his love and his passion all his life, and shelves of trophies showed his love of the game, the results of his constant pursuit to improve, and his hours and hours of play. When travelling anywhere, he always found tennis partners and that way made many friends from various parts of the world. Another passion as well as a way of life for Floyd was running, an almost daily form of exercise with occasional marathon runs.

Travel was always an important interest of Floyd’s, and he and Darlynne travelled at every opportunity. Paris, Rome, Istanbul, and all of Italy were up there as favourites. He was always so impressed with the diversity of nature and the lives of the common people in places like Turkey, Romania, Spain, the Canary Islands, and the back country of places like Australia. He always spoke about his being so very lucky that he was able to have this opportunity to travel, to see, learn, and experience so much! He was a person who was noted for his great appreciation, who saw the good in areas that others didn’t see.

Floyd loved animals and most of all, his dogs. Over the years there were five doggie family members – including his most recent and still with us, companion Joseph, a floppy eared Yorkie who was so devoted to him. They were the best of companions right up to the end; Floyd called him ‘his forever best friend’.

Floyd was also considered a ‘perfectionist’, a very particular dresser, some referred to it as super fussy! In dress attire, shoes were his passion! He was fussy, the same way with his surroundings. His garage was more of a show-place than a place for yard or sports equipment, and it contained things such as art and mirrors.

Floyd was a special person and many found him to have unusual intelligence in a number of areas.  He will be missed by many!

A Celebration of Life will be held on SATURDAY, OCTOBER 16, 2021, at 4:00 pm PDT, at Springfield Funeral Home, 2020 Springfield Road, Kelowna, BC. The family would like to invite all who are unable to attend in person to join online by Livestream (same time as above). A recording will be made available to view shortly thereafter.

In Lieu of flowers, donations may be made to the Heart and Stroke Foundation of Canada.


The service for GEDAK, Florian “Floyd” Joseph is scheduled for SATURDAY, OCTOBER 16, 2021, at 4:00 pm. Below you will find the map for the service location and the contact information should you have any questions.