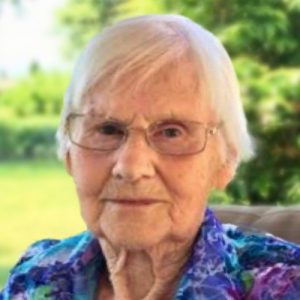 On the evening of  April 8, 2021 our dear mother, grandmother and great-grandmother, Cornelia Adriana “Corry” Gevers, went to be with the Lord.

Born June 12, 1920 in the Netherlands to Martinus and Dimphina Vroegryk, Corry was the middle child of 13 children and grew up on an acreage with a large garden and livestock.  At a young age, Mom left  home to work as a housekeeper for a neighbour town doctor.  Our Mom lived through the Second World War from age 19 to 25.  At the time she was in a relationship with our Dad, but they had to part ways due to the war for several years.  Mom often spoke of the war and how difficult those times were, however she always said they were the fortunate ones living in the country, as those living in the cities were often with very little or no food to eat.  After the war ended Mom and Dad, Marinus Gevers started dating again and married on July 19, 1950.  Shortly after the birth of their second child they made the difficult decision to move to Canada, the country with more opportunities.  This was difficult for Mom, for in those days travel was very rare and most people didn’t have phones, she knew she would likely never see her parents or hear their voices again, which was the case.  Mom, Dad and two toddlers arrived in Canada July 31, 1954.  Corry and Marinus had five more children in Canada.  Mom’s last child was born when she was 45 which she said “always kept her young”.

Mom was a devoted, caring and loving “stay-at-home mom” for most of the years her children were growing up.  English was her second language, however she learned to speak and write the language very quickly and beautifully.  Something Mom did not take up was to learn to drive, however this did not stop her from getting around; she rode her bicycle everywhere.  The bicycle was used for everything from picking up groceries to occasionally delivering Dad his lunch that he forgot at home to his work some distance away, and later even visiting her children when they had homes of their own.  We have to mention, Mom had a very standard bike with no extra gears but she could still pedal her bike all the way up Springfield hill until she was 80 years old!  She also lived in the family home until she was 95 years old, still doing her own housework and some of the gardening and yard work as well.

Together Mom and Dad did their fair share of travels to Europe (Holland mostly), New Zealand, some nice Hawaiian trips, along with eastern Canada. Mom loved to travel taking her first trip on her own to see her siblings after not seeing them 17 years in 1971.

We would like to thank many of the great nurses and care-aids at Mission Creek Landing for their care of Mom over the past 5 years.

Due to Covid-19, a private Funeral Mass will be held, for her children only, at Corpus Christi Parish on Tuesday, April 13, 2021.  A Celebration of Life will be held at a later date.