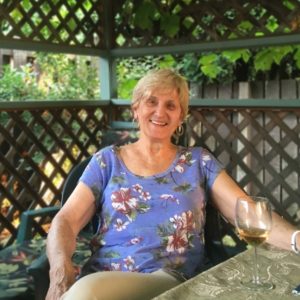 Our beloved Nola Božića Godinovich, took her last breath late in the evening of June 19th, 2020.  She spent her last evening, cozy in her bed, listening to music with Leanne, one of her many close friends. She died peacefully.

Nola celebrated and appreciated all that life had to offer. You could not help but be inspired along with her. Everything was an adventure for Nola. Each meal was an event and every glass of wine a moment to toast.  For Nola, every person was a reason to celebrate – which might explain why it felt so fantastic to be around her.

Nola Božića Godinovich was born in 1939, in Perth, Western Australia, to the late Andrija Godinovich and the late Marija Godinovich, nee Berkovic.  She was also preceded in death by her sister Mary.  Nola is survived by her brother Andy, her niece Jane, her nephew Andrew, and her great-nieces and nephews Zackary, Thomas, Ella and Charlie. Nola has extended family in both Australia and Croatia. She made deep friendships in Canada and around the world. Nola did not have children, but she took on a central role in the lives of children of her friends.  For Leanne and Alex, Mila and Ivanka, Dylan and Andrew, Nola was a parent, an aunt, and a friend.

Nola spent her childhood and youth in and around Perth.  She received her first teaching certificate from the Claremont Teacher’s College in Western Australia in 1958.  For a short while, she taught in Beverly, Western Australia.  In 1965, she and her good friend Marilyn set sail on a cruise to explore the world.  After landing in Canada, she and Marilyn managed to get teaching jobs in Toronto, and later Vancouver.  In Vancouver, they also worked at the Georgian Hotel.  During this time, on the cruise ship, and her early years in Canada, Nola met people who have remained some of her closest friends. Sadly, just six months ago, on Dec. 12th, 2019, Marilyn passed away in Victoria.  Nola passed away 55 years to the day that they both arrived in Canada.

Nola began teaching in Kelowna in 1969.  Between 1969 and 1974, Nola taught at different elementary schools in the Kelowna district, her first being a grade 2/3 class at Glenmore Elementary School. She took a leave of absence and completed her Bachelor of Education at UBC in 1975.

She returned to the Kelowna school district in September of 1975 and taught a grade 3 class at Lakeview Elementary school for two years. Nola became the Primary Consultant for the school district from 1977 to 1980, and then she left to complete her MA at the University of Victoria. On her return to Kelowna, she taught secondary and elementary classes until joining the school district’s Learning Disabilities team at Martin Education Centre. Nola focused on teaching communication skills. In her academic writing and study, she specialized in literacy.  She loved finding books that would capture and engage the attention of an individual student.  She inspired students to learn by drawing from their interests.  She valued, supported, and celebrated student’s own individual styles of learning and encouraged and enabled them to express themselves.  Some of the students, and their families from her beginning years of teaching in Kelowna, remained good friends with her throughout her life.  Nola retired from teaching in 1999.

Nola was a community builder.  It was a passion for her to bring people together.  She participated in or coordinated various art and cultural events.  She was involved in the film society, theatre groups, book clubs, and recreation programs.  Nola loved music, she loved going to music festivals.  She loved to share her excitement for food, books, writing, movies, gardening, camping, and swimming in the lake.  She enjoyed entertaining her friends, with good food, interesting conversation, and of course wine. Through her life experience, interests, and adventures, Nola cultivated a far-reaching, close circle of friends that she valued deeply.

Nola also loved to travel.  She often visited family and friends in Australia, Europe, and locally in British Columbia.  In Spring 2019, Nola took her last of many trips to Australia where she spent a month visiting her brother.  The memories and pictures from this trip provided comfort for Nola during the last few months of her life.

There is a story Nola wrote and titled, “I Must Go Down to the Seas Again“.  In this story, she describes her ever-changing but constant relationship with the sea. She describes the sea first, as her “playmate“, then a location for the joy of fishing and collecting seafood for fires and meals on the beach with her family, and later the sea becomes a place for her to reflect and dream of all that ‘could be’. She concludes the story with the words,  “I know that when my time comes, I want my ashes to be scattered on the sea“.

Nola’s ashes will be scattered near her childhood home at Woodman Point, in Perth, Western Australia, as well as Okanagan Lake, and off the coast of British Columbia.

Nola spent the last three months of her life living at the Kelowna Hospice House.  Family and friends are so thankful for the amazing care she received.  A huge thank you to ALL caregivers during this uncertain time.

We hope to celebrate Nola’s life in person when it is considered safer to do so.  Hopefully, we will plan the gathering for later this summer.  If that does not look possible, an alternative, most likely virtual celebration will be planned.

In lieu of flowers, please make a point of reaching out to friends, an acquaintance, or even a stranger with a simple act of kindness, showing you care.