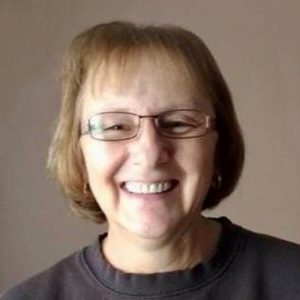 Born January 12, 1955, in Hanna, Alberta, Cathie lived and travelled all over Canada as a sergeant in the Canadian military from 1974-1996. After her retirement from the Chilliwack, BC base, Cathie went back to school for carpentry in Kelowna. She moved away once, but made her way back again.

Cathie loved her dogs, she always had at least one.  Being quite the handy woman, she could do almost anything herself.

An extraordinary, independent, strong woman, Cathie would do anything for someone she cared about.  She was the glue of her family.

Cathie was predeceased by her parents Olga and Stanley. She leaves behind her beloved dog, Dancer; her sister Elaine and brothers Kevin, Barrie, and Jeff; also, her nieces Jennifer and Jasmin; and her great-nephew Adrian and great-niece Lily.

Cathie will be greatly missed by those whom she left behind.

All are welcome to her Graveside Service, on Thursday, June 16, 2022, at 10:00 am, at the Kelowna Memorial Park Cemetery, 1991 Bernard Ave, Kelowna, BC. For close family and friends, a reception will follow.

As an expression of sympathy, flowers may be sent to Springfield Funeral Home in Kelowna, BC.


The service for GORMAN, Catherine Anne “Cathie” is scheduled for Thursday, June 16, 2022, at 10:00 am. Below you will find the map for the service location and the contact information should you have any questions.