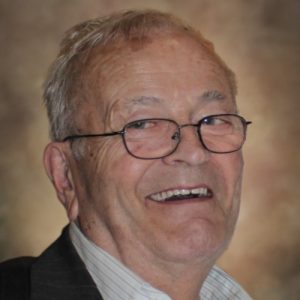 On Sunday, October 4, 2020, just weeks before his 90th birthday, Allan Gravelines passed away at Brookhaven Care Centre in West Kelowna. His beloved wife Ingrid and son Rony were with him in his last days.

Allan enjoyed a long life and touched many people, some deeply, some briefly. He was an engaging man, whose keen interest in hockey, politics, food, and family gave him something to talk about with anyone he met. As a Francophone born in Letellier, Manitoba, he was happy to pursue his many conversations in French, English, or a combination of both.

The youngest of ten children, Aime Jean Gravelines lost his mother at age two-and-a-half, was raised by relatives until his dad remarried, and was sent to live at St. Boniface College early in his school life. The nuns, fond of little Aime, often treated him to stacks of pancakes smothered in syrup. How his eyes shone at the memory! This began his life-long love of food: beef and kidney stew, goulash, popcorn, cookies, pie, burgers, fries, and of course ice cream.

At age 16, Aime discovered his Dad expected him to be a priest. This prompted him to leave school, change his name to Allan and seek his fortune. It was just after World War Two. Winnipeg’s predominantly English employers, still angry that some French Canadians refused to go to war, shunned the young man with broken English.

Allan’s break came when he met a German immigrant who took him to apply for a job at Coca-Cola. Allan got hired as a Coke delivery truck driver. It was this early experience that fuelled Allan’s later involvement with trade unionism and politics. He served as the president of his local union for twenty years and was active in the Manitoba NDP.

While out on a delivery, Allan met his first wife Frances who was working at a drug store lunch counter. After a six-month courtship, they married in April 1950 and went on to have four children Laurie, Gail, Neil, and Lisa. During their thirty-year marriage, Allan tried his hand at new and used car sales, accepted his alcoholism, and, with the support of AA, went on to live a life of sobriety. He spent the final part of his work life as a driver for Weston Bakeries.

While delivering bread to a local delicatessen, Allan met his second wife Ingrid. Together they enjoyed their Lake Winnipeg cottage, their son Rony, stepdaughter Gaby, and socializing with family and friends. Upon retirement, Allan and Ingrid moved to Westbank where they delighted in warmer winters, fruit trees, and friends.

Allan Gravelines lived the last year of his life at Brookhaven. The family is grateful for the company and care Brookhaven staff provided Allan especially during the difficulty of COVID isolation. Staff have shared many touching stories of how Allan would be in demand by staff wanting to spend time with him to hear his life stories or get financial advice. With his short term memory failing, Allan would come up with nicknames for staff to avoid the embarrassment of forgetting their names. One of our favourites was the nurse that dispensed his daily medicine, who he affectionately called his “drug dealer”.

When told he had to cut back on his many favourite foods to control his diabetes, Allan once decreed: “If you can’t eat ice cream, what’s the point of being alive?”

Join us in celebrating Allan. Raise an ice cream cone in his memory: husband, father, grandfather, great-grandfather, and brother.  We miss you.