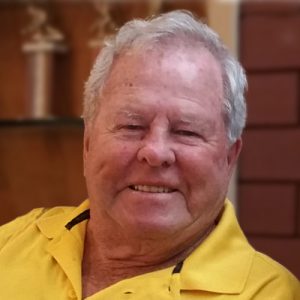 With great sadness, the family announces that on January 5, 2022, Clive passed away at the age of 89 years old at the Hospice House in Kelowna, BC with his beloved wife of 55 years, Eleanor, holding his hand. His last days were spent with family and close friends by his bedside, sharing “Griff” stories.

Clive was born and raised in Calgary, Alberta, the third of 5 children born to Bernard and Marion Griffin-Beale. He was predeceased by his father & mother; sisters Gladys & Thelma; brother Danny; daughter-in-law Grace, and grandson Lucas; as well as a life-long friend, Johnny Devlin.

Clive graduated from Crescent Heights High School, went on to the University of Alberta, and then Royal Military College.  He went to work for Peter Bowden Drilling, Thomson Drilling, and then McEvoy Canada where he was known for his yearly lobster parties.

Clive and Eleanor travelled around the world for Clive’s work.  After he retired in the 80s, he enjoyed his boat the Alibi Wahoo in Gibsons, BC, charter fishing, and scuba diving.  He also enjoyed sports, hanging with his old friends from the Oilpatch, and making people laugh.  Clive and Eleanor enjoyed their snowbird status and spent many winters with their friends in Bucerias, Mexico and Las Vegas, Nevada. He was and always will be the family’s hero, fighter, and meanest son of a gun in the Oilpatch, best husband, dad and friend forever.

Special thanks to the kind staff at The Hospice House, Red Cross and BC Cancer, and Dr. Eddie Naude, we gratefully thank you for the level of care and compassion you provided for our dad. Your guidance brought peace and comfort to dad, especially the past month.

In lieu of flowers, memorial donations may be made to Hospice House in Kelowna or BC Cancer.

A Celebration of Life will be held in the future.