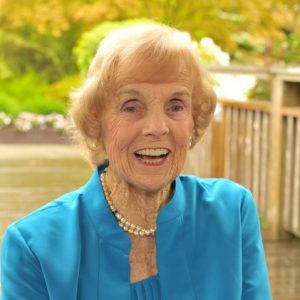 Gwen Murray (Holland) passed away peacefully on Nov. 17 at the age of 101. She was born May 28, 1919, in Lethbridge, Alberta, one of 5 children born to Art and Gladys Baalim. She is survived by daughters, Anne Trotman (George), Mary Holland (Aaron Jefford), and son Geord Holland (Jory).

As a young girl, summers were spent at the cottage built by her father in Waterton Lake, the town within Waterton Lakes National Park in Southwestern Alberta.  Gwen and her siblings were constantly playing tennis and golf, hiking, fishing with their father, hiking the trails and horseback riding, along with summer dances and movies at the tiny theatre. Her love of sports led her to attain a degree in Physical Education from Margaret Eaton School in London, Ontario, where she began her career at the YWCA, teaching swimming as her specialty. While in London, she met and married George Holland.

After the war, they returned to the West to live in Calgary, eventually landing in Kelowna, where they raised their 3 children.

Gwen was active in community affairs and had volunteered all of her life, including her teaching swimming for the Sunnyvale organization which supported mentally challenged children in Kelowna. She created and taught one of the first drop-in exercise classes for women at the old Yacht Club. She devoted many hours to the Kelowna Hospital Auxiliary where she became President. Always one to speak out on behalf of others, she turned her attention to local politics. She was elected to Kelowna City Council, the first woman to sit as an “alderman” in its history.

After her husband George passed away in 1974, she continued to be a presence on the city council during her second term.

Sometime after, her relationship with a long-lost high school friend, Lloyd Murray, was rekindled. They married in 1976 and moved to Victoria. Together they led a busy life traveling, golfing, dining, and dancing at the Victoria Golf Club, playing tennis until she was 78, boating, gardening, and entertaining their many friends. They made annual visits to Waterton Lake where they maintained the Baalim Family Cottage for many years. They always stopped in Kelowna while en route to or from Waterton. And her children, with kids in tow, loved to return the visit to Victoria, where she and Lloyd were doting grandparents.  Lloyd’s son, Greg Murray, and his wife Anne were very dear to Gwen and she happily became a grandmother to their children whom she lovingly called her 2nd family.

Gwen was a kind, generous and loving grandparent to 12 grandchildren (Mike, Mitch, and Brad Trotman, Scott and Christina Klein, Chessa, Keda, Taylor and Tanner Holland, Evan, Emily, and Cameron Murray) and 12 great-grandchildren. Most importantly, she was an amazing role model who encouraged and supported the grandkids in a variety of sports and community activities, as well as their education.

After losing Lloyd in 2001, Gwen continued to live in their home in Victoria for a number of years, staying active at the Victoria Golf Club and volunteering for Meals on Wheels, playing bridge, and enjoying many friends. Gwen returned to Kelowna in 2011, where she spent her final years. During that time, she enjoyed the love and support of her children and grandchildren at all family dinners and special occasions. In recent years, she was lovingly supported in her own condominium unit by her care aides and friends, Elaine Kennedy Shirley Berni and Sharon Benko, as well as Chessa Holland, along with other family members. After moving to Glenmore Lodge a few years ago, Gwen received excellent care from the aides and recreation staff, especially during the recent difficult times.

We will remember her for her beauty, grace, intelligence, lady-like demeanor, and fiercely independent spirit. Truly, hers was a life well-lived, with no regrets!

A celebration of life will take place in 2021 when conditions permit. In lieu of flowers, donations to Kelowna General Hospital Foundation or your charity of choice would be appreciated.