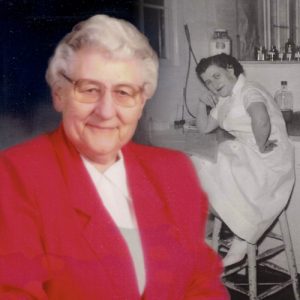 It is with sadness that we announce that Margaret Haub, went home to be with the Lord on March 12, 2021. At age 92, her passing was peaceful while she was surrounded by family.

Born November 10, 1928 in Edmonton, AB, Margaret was raised in Athabasca, AB until age 16. Then, she resided with nuns, back in Edmonton, while she received her education. In Prince Rupert, BC she worked at the Miller Bay Hospital and when her children arrived she lived in Vancouver, BC. In 1968, she came to Kelowna, BC and stayed for over a decade before returning to Prince Rupert, then in July 2020 she came to stay in Kelowna.

Margaret was filled with compassion and care for others, she always made sure that those around her were taken care of. She often provided for fundraisers with quilts and jewellery. She had a knack for staying aware of everyone’s comings and going. And, she invited everyone to holiday dinners, when she was no longer able to continue with the preparations, she still invited all and had the dinners catered.

Margaret was bold, independent, and strong-willed. Her take-charge personality will be dearly missed.

The family would like to acknowledge the palliative care team, Dr. Mackel, and Dr. Zwardon for their care and attention to Margaret.

A Graveside Service will be held at the family plot in the Athabasca Cemetery on Thursday, July 8, 2021.