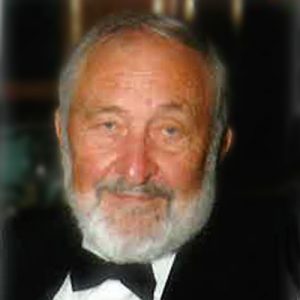 Fred passed away on February 8, 2020. He was born in Edson, Alberta and at the time, his family lived in a small railway town in the Rockies where his father was a fireman on the CNR.

He is survived by his loving and devoted wife, Ava; his two sons Fred Jr. and Ronald and their ladies Laura and Danuta.  Fred was especially proud of his grandchildren Justin and Kyra.  He had four sisters: Nelly, Helen, Mary, and Jeanne, all have predeceased him.  He is also survived by four nephews: Jerry, Larry, Danny and Robbie; six nieces: Patty, Darlene, Rhonda, Maureen, Brenda, and Marylou.  There was a large family of children from his nieces and nephews, Fred loved them all and was always happy to be with them.  Ava came from a large family, who were also dear to his heart.

Fred spent his happy teen years in Edson and managed to have a variety of jobs while attending school.  His favorite job was as a projectionist at the local movie theatre.  He attended the University of Alberta in Edmonton on a Bursary Scholarship and taught school at the age of 17.  Fred joined the Navy in 1951 and was there for 34 years.  He, in turn, became an Air Armourer, Air Observer (navigator), Operations Officer on several ships, Squadron (ships) Training Officer, Staff Officer in Maritime Headquarters in Halifax and Ottawa, a recruiter, and was in command of a Helicopter Destroyer Detachment and in charge of an Occupational Analysis Function, which he helped to pioneer and from which he received international recognition and awards.  He was devoted to the Navy and became a Commander.  During his flying years, he served in a Support Squadron, an Avenger Anti-submarine Squadron (VS88) and a Sea King Helicopter Anti-submarine Squadron (HS50).  Fred served on many ships on both coasts including three WWII Frigates, three WWII Destroyers, two Helicopter Destroyers, a cruiser and two Aircraft Carriers.

On retirement, Fred and Ava settled in Victoria, BC then because of health problems moved to Kelowna, BC, which they loved to the end.  They loved to travel the world and wintered in the USA and Mexico.  One of Fred’s final wishes was that he be cremated, and his ashes be scattered at sea off Victoria (Esquimalt).

A viewing will take place on Thursday, February 13, 2020 at Springfield Funeral Home. A Celebration of Life will be announced at a later date. If you wish to send a condolence, post photos or share a memory, please scroll down the page to the area called “Condolences”.