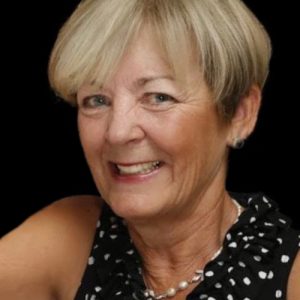 Marilyn Margaret Hedman was born in Vancouver on September 16, 1951, and passed away on the afternoon of June 16, 2022, surrounded by her loving husband and kids.

Marilyn grew up in Hopkins Landing and on the Sunshine Coast, BC, graduating from Elphinstone Secondary in 1969. Shortly after graduation, Marilyn met Jim, the love of her life, while working at BC Tel in Gibsons, BC.

The 70s were full of milestones for Marilyn and Jim. They married in 1971, bought their first home in ‘72, welcomed their daughter Angie in ‘75 and son Matt in ‘77. Jim’s relocations within BC Tel saw the Hedman family move from North Vancouver and Lynn Valley in 1979, to Kamloops in the early 80s, and then on to Kelowna in 1984 into their family home in Crawford which they still live in today. They also had a short two-year move to Castlegar in 1987 where she worked at the credit union.

Marilyn’s childhood nickname was “Pogo”, likely because she was always on the go. As a child, she loved swimming in the ocean at Hopkins Landing, even winning some annual swimming competitions. She played competitive rec league softball over the course of 20 years and in the early 1990s took up golf, and was quickly hooked. She and Jim became members at the Kelowna Springs Golf Club and throughout their near 30 years there, she went on to win two Ladies Club Championships and three Senior Ladies Championships. Over these years, she also celebrated two holes-in-one. What meant the most to her though, were the deeply meaningful friendships she made on the golf course (shout out to her golf girls).

After being a stay-at-home mom until the kids were in school, Marilyn went back to BC Tel/Telus and by the time she retired had been with the company for a total of 24 years.  From there, she went on to work at KGH Foundation for 11 years as office administrator, finally retiring in 2013. Through her working years and beyond, Marilyn dedicated a tremendous amount of her time serving as Registrar at Kelowna Minor Hockey, an organization she was committed to for nearly 30 years. This is where she met so many truly wonderful and incredible people, formed numerous lifelong friendships, and enjoyed countless moments of fun and shenanigans.

Through the early 1990s the Hedman house billeted a number of different players for the Kelowna Spartans, but one notable player, Joel Irwin, became an extended family member even to this day.

One of the things Marilyn loved the most, was being a grandparent to Lucas and Amelia.  Affectionately known as ‘Nanie’, Marilyn enthusiastically cheered and supported each of them in their sports and interests.  Growing up, they loved going to Nanie and Papa’s house for swims in the pool, sleepovers, and for all the fun things they could get away with at their Grandparents’ house. She deeply cherished the close relationship she had with each of them, as did they.

Marilyn was well known for having an admirable zest for life and her friends and family describe her as strong, loving, kind, resilient, witty and vibrant. Everyone knew that Marilyn and Jim had an open door to their home, welcoming and hosting many friends and family throughout the years.

Marilyn was predeceased by her mother, M. Marion Hopkins; her father, George Hopkins and his wife Lil; and her in-laws, Perry and Ina Hedman. Marilyn is survived by the loves of her life: her husband Jim; daughter Angie (Shawn) Rachkowski; son Matt (Charlene); and her grandkids Lucas and Amelia; as well as her faithful companion Harley, their three-year-old bernadoodle. Marilyn is also survived by her siblings Diana (Bob), John (Dawn), Bob (Barb), and George; as well as her sisters-in-law Judy (Jim) and Pam (Rob); brother-in-law Bill (Jackie); and extended family and many friends.

If you find yourself on a patio on a warm summers’ night, have a glass of white wine or a slushy lime margarita and give a toast to Marilyn. We know you’ll feel her smiling down on you.

There will be a Celebration of Life open house in Marilyn’s honour on SATURDAY, JULY 9, 2022, FROM 1:00 PM to 4:00 PM, at KELOWNA SPRINGS GOLF CLUB, 480 Penno Rd, Kelowna, BC. Family and friends are encouraged to drop by, visit and share special memories of Marilyn.


The service for HEDMAN, Marilyn (née Hopkins) is scheduled for SATURDAY, JULY 9, 2022, FROM 1:00 PM to 4:00 PM. Below you will find the map for the service location and the contact information should you have any questions.