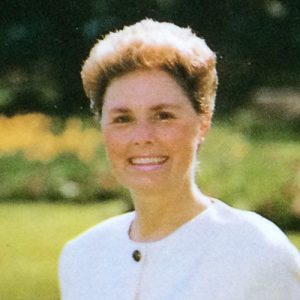 Given her roots on Canada’s West Coast, the self-described “child of the sea” grew up surrounded by bald eagles, ancient rainforests and ocean life.

Linda, as most people knew her, moved to Vancouver to train at St. Paul’s Hospital School of Nursing. She received her diploma in 1960 and accepted employment as a registered nurse where she trained.

It was at St. Paul’s Hospital where, during one of her shifts, she would first meet her future husband Jack (the love of her life), who confesses Linda’s radiant smile instantly won him over.

They were married in 1962, and two years later the couple, along with their first child, a baby boy named Paul, drove a rental pickup truck north to Prince George to begin a new life together. Shortly after, their daughter Kim was born.

Her husband’s eventual interest in politics took her family to Victoria where she continued on with her interest in textile arts, completing her Master Weaver’s certification — which involved a “comprehensive study of flax and linen” with the Guild of Canadian Weavers — and teaching weaving workshops in Canada and the U.S.

“Crisp, impeccable linen. I am captured by its beauty, texture and enduring quality,” Linda once wrote of what she often referred to as her “magnificent obsession.”

Linda and Jack retired to Kelowna in 1993, where they would settle into the Village at Gallagher’s Canyon. There, she spent years in her studio weaving tartan blankets for family members with Scottish heritage. These blankets, no doubt, will continue to provide comfort for years to come.

How will Linda be remembered? She was known for her constant curiosity, her wonder at the world and her optimism. She genuinely cared to hear people’s stories, and she loved family and friends unconditionally.

She was a devoted wife, mother and Nonna to her four grandchildren, all of whom are recipients of lovingly woven sleigh blankets.

Linda will also be remembered for her sweet laughter, her love of lavender and chocolate and the extraordinary artwork she produced over the years, paintings inspired by a six-month backpacking trip around the world that she took with Jack when they were in their late 50s.

She had a favourite fridge magnet that read: “I’m too much fun to be kept at home.” No surprise, then, that she was a great traveller — conquering the West Coast Trail, chasing numerous adventures in Europe and enjoying frequent trips to her beloved Maui.

Linda was someone who cared deeply about the plight of Indigenous peoples living in Canada. At every opportunity, she made an effort to learn more about their communities, including on her 70th birthday trip to Haida Gwaii where she was honoured to meet with local artists who were weavers of cedar and carvers of argillite.

Her last words of advice to her four grandchildren? “Always be curious and kind. But if you have to choose, always be kind.”

Linda is survived by her loving husband Jack of 59 years, her son Paul and partner Jane, her daughter Kim and husband David, four grandchildren (Jordan, Makena, Emma and Jackson), her brother-in-law Bob Heinrich and family, and brother-in-law Harvey Grigg (who was married to her late sister Margaret) and family.

A heartfelt thanks to Linda’s community at the Village of Gallagher’s Canyon who went above and beyond during her final weeks, as well as to the Kelowna Hospice House where Linda passed peacefully on June 24.

Linda’s husband and children would also like to acknowledge family physician Dr. Josee Lesperance, a humanitarian in the truest sense of the word, whose care and service was exceptional and will never be forgotten.

If you would care to make a donation on Linda’s behalf, her charity of choice is Indspire.ca — a reputable registered national Indigenous charity designed to support the education of Inuit, Métis and First Nations people in Canada.

A private celebration of life will be held for Linda this Fall with family and close friends.