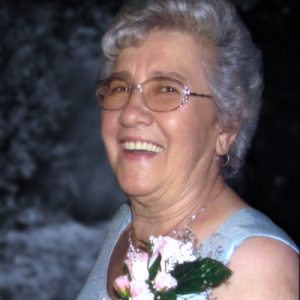 It is with deep sadness that we announce the passing of Victoria on March 24, 2021, at the age of 80. She was born March 5, 1941, to Paul and Caroline Sicinski in Birtle, Manitoba. Victoria grew up in the district of Birtle, Manitoba. She met the love of her life John Hetter in 1957 and married him on November 26, 1960. They moved to R.M. of Boulton, Manitoba, and then in 1972 they moved to Russell, Manitoba, and finally they moved to Kelowna, BC in 1979, where she enjoyed family and friends until her final day.

Victoria was predeceased by her husband John, her parents Paul and Caroline, as well as her sister Anne Kowal and brother Lawrence Sicinski.

Victoria enjoyed the outdoors. She loved working in her gardens, both vegetable and flower. She loved going camping, fishing, and snowmobiling. She was also ready to play cards with anyone willing to play. She also enjoyed playing bingo and liked it even better when she won. She enjoyed cooking and baking, and if you ever stopped to see her, she could have a full-course meal on the table in no time. She will be remembered for her perogies.

Victoria enjoyed spending time with her family and friends. She will be remembered for her big heart and the smile that was always on her face. She will be dearly missed by all.

The family would like to thank her family doctor, Dr. Thomson; her cancer Doctors, Dr. Rao and Dr. Mohamed; and all the staff at Kelowna General Hospital and on the palliative ward at Brookhaven Care Centre.

A Celebration of Life will be held to honour Victoria at a later date due to the current pandemic restrictions. In the meantime, family and friends will honour her each in their own way.