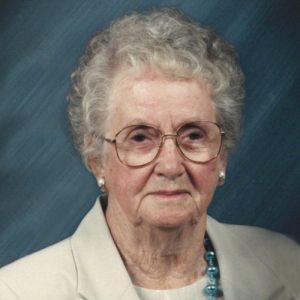 Mildred was a life-long learner and teacher.  She received a Junior Certificate from the Alberta Department of Education in September 1946.  Mildred and Charles were married on July 4, 1951 and resided in Fort Vermilion, AB where Charles pastored, and Mildred taught school.  Together they pastored and taught in various communities in Alberta and the NWT all the while raising seven children.  Mildred continued to further her education through night classes and summer school.  She was rewarded with earning her Bachelor of Education through the University of Alberta in November 1973.

The family moved to Westbank, BC in 1972 to be near Mildred’s mother.  Mildred taught at Immaculate High School until her retirement in 1988.  Mildred will be deeply missed and lovingly remembered by her family and friends.

A Funeral Service will be held to honour Mildred Howey, due to the current pandemic restrictions it will be by invitation only. However, the family would like to invite all who would like to pay their respects to join online by Livestream on Friday, November 20, 2020, at 10:00 am (see below)