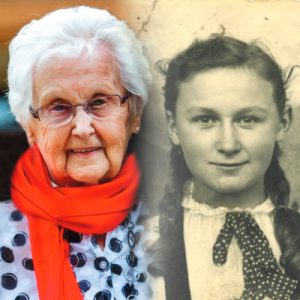 It is with Great sadness that the family of Catherine Huber share her passing on January 1, 2021. She was predeceased by her husband Jack (d. August 15, 2003) and daughter Holly (d. October 14, 2020). She leaves her daughter Cathy (Jack) Endecott and son Harvey (Marie) Huber; 7 grandchildren Chris, Phillip, Justin, Stephanie, Melissa, Amanda, and Jessica; along with 6 great-grandchildren Katie Mattie, Nola, Haddie, Dawson, and Jace.

On February 12, 1927, our Mom was born in Grabatz, Romania. Our parents emigrated from France on November 28, 1951, arrived by ship in St. Johns, New Brunswick with their 1st newborn child, Cathy, in tow; This is where they would start their new Canadian Family Legacy. Through numerous cities along with many types of employment (not to mention the language barrier), they slowly made their way west to Saskatchewan in hopes of uniting with distant family relatives, which was a success. Catherine was “all in” with this new venture. She welcomed Holly, their second daughter to the family, and soon after their final family addition, Harvey their son. Catherine assisted wherever she could and helped by running a Café and General store, she was also a postmaster of the small town of White City along with helping Jack in the building of their 2 separate houses, all while raising a family of 3.

They decided to make one last venture west to the land of the sun, known as the Okanagan. Kelowna, BC was to be their dream destination, where Catherine continued her role as #1 Mom. She worked, for a short while, at Kelowna Packers and the Franklin Motel while enjoying her professional seamstress abilities for sewing and creating countless outfits for many customers and friends, not to mention her family. In her spare time, she dearly enjoyed her crafting skills and shared these with her daughters and numerous friends as well as with the Country Bumkins craft shows at the East Kelowna Hall. At the end of many a day, Catherine would relax by adding, sorting, and organizing her stamp and coin collection which she totally enjoyed.

She will be sadly missed by her family, Mom touched the lives of so many people who loved her, learned from her, and were inspired by her. Her Spirit will live on with us.

We would greatly like to thank the staff and management of Sun Point Village for their compassionate care and kindness, for she so enjoyed living there.

A Family Memorial Service will be held at a later date, when circumstances permit.