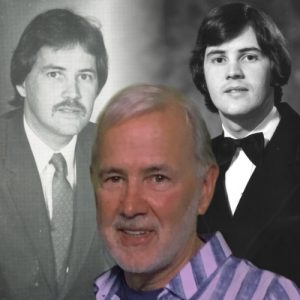 To all those who loved him, knew him, respected, and trusted him, we his family are heartbroken to announce that on November 9, 2020, Robert Allan Hussey returned to his Father in Heaven.  No man has been more kind, gentle, or full of love.  No life has been more marked by consideration for others, presence in times of need, a deep well of patience, and a fullness of grace.  His eternal and unwavering love for our mum Ruth is an inspiration and testament to what remains possible in our often cynical and self-focused age.

Dad’s profession was as a Chartered Accountant, but he rarely talked about numbers.  Client visits were an opportunity to help others, to listen to their stories, and often pray with them as they shared pains and fears they may have kept from others but knew they could share with him.  Nothing brought him more joy than humbly serving others by holding them up so that they may aspire to greater heights.  These acts of service occurred in every area and aspect of his life, from his family to his clients, his church, and within the general community.   No one was excluded from his unconditional love.

Born in Trinidad BWI, to Eric and Vera Merle Hussey who traveled the world as early oil drillers, Dad was raised across the prairies and finally for his most formative years in Petrolia, Ontario. Possessing a tireless work ethic, he became the youngest partner in the national accounting firm he joined, co-owned a local landmark retail business in Sarnia, Ontario for over 30 years, started two successful private accounting firms, sat on the boards of various charities, his church, and in the last ten years was a founding board member of two independent schools.  He is survived by his loving wife Ruth, his sons Erin and Jordan, his brothers Wayne, Paul, and Dale, daughters-in-law Michelle, Livia, Laura, and Sarah and his beloved grandchildren, Ethan, Finn, Knox, and River, his brother-in-law Alvin and sister-in-law Brenda; and all of their wonderful families.  He is predeceased by his precious son Shane and his brother Darwin. We have no doubt the three of them are rejoicing as they reunite on the other side and we choose to rejoice with them knowing that the sweetest heart among us is now free from pain and at peace.

Dad’s wrestling with the dark shadow of depression was a lifelong fight.  He shared his scars openly with those he felt could heal from seeing that they were not alone in their fight with the same demons.  Sharing in the brokenness of others and allowing them to share in his, was a deep root in the tree of his immense compassion.  After fifty years of beating back the lies that depression relentlessly launched, his light finally flickered and faded.  The task for us now is to rekindle that torch and carry it into the nights that others continue to face.

For decades Dad carried in his wallet the famous words of Theodore Roosevelt, and his speech entitled, The Man in the Arena.

“It is not the critic who counts; not the man who points out how the strong man stumbles, or where the doer of deeds could have done them better. The credit belongs to the man who is actually in the arena, whose face is marred by dust and sweat and blood; who strives valiantly; who errs, who comes up short again and again, because there is no effort without error and shortcoming; but who does actually strive to do the deeds; who knows great enthusiasms, the great devotions; who spends himself in a worthy cause; who at the best knows, in the end, the triumph of high achievement, and who at the worst, if he fails, at least fails while daring greatly, so that his place shall never be with those cold and timid souls who neither know victory nor defeat.”

A true gentleman, whose legacy of faith in God, of love for his wife, of commitment to his family, and of compassion for others set an example for all who knew him; this is the worthy mantle that we will carry forward in his honour.

We love you all.

Memorial donations can be made to World Vision Canada at www.worldvision.ca

A Funeral Service will be held to honour Robert Hussey, but due to the current pandemic restrictions it will be by invitation only, however, the family would like to invite all who would like to pay their respects to join by Livestream on Wednesday, Nov 18, 2020, at 10:00 am at www.springfieldfuneralhome.com, where condolences may also be sent to the family.