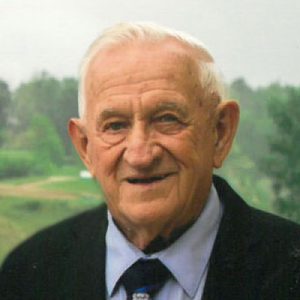 It is with great sadness that we announce the passing of our Dad and Grandfather, Tony Huziak, who passed away on February 10, 2020 at the age of 86. Tony was sadly predeceased by his wife, Victoria. He will be lovingly remembered by his daughters Debbie (Ken) of Moose Jaw, SK and Tracy (Colin) of Kelowna, BC; his son Melvin of Kelowna, BC; his grandchildren Mike (Stacy), Pam (Jarred), Tim (Melissa), and Jordan; and his great-grandchildren Eathen, Jayce, Jesse, Madison, Alexis, and Parker.

Born in Aaron, SK on April 23, 1933, Tony went on to marry Victoria Pastuch on June 16, 1956. Tony had many vocations, in Regina, SK he became a barber for 12 years, in Liberty, SK he ran the Liberty Motor Hotel for 13 years, and then when they moved out to Kelowna, BC in 1981 he ran a garage until he started his own landscaping company.

Tony was a very hard worker spending many hours either in the garage or out in the garden. It could be said that Tony had a “green thumb”, in the garden he was often transplanting the plants that were his pride and joy. He also spent many hours at the church helping in the kitchen making perogies or out in yard trimming trees.

The family would like to extend a special thank-you to the staff at Lake View Lodge in West Kelowna. Tony made many friends there. Thank you for the tremendous care and for looking after him.

Tony will be sadly missed by all who knew him.

A Funeral service of the Divine Liturgy will be held on Tuesday, February 18, 2020 at 9:30 am at Ukrainian Catholic Church, 1091 Coronation Ave, Kelowna, BC. Interment to follow in Kelowna Memorial Park Cemetery. Should family and friends desire, memorial donations may be made to the Alzheimer Society, alzheimer.ca.


The service for HUZIAK, Anthony “Tony” is scheduled for Tuesday, February 18, 2020 at 9:30 am . Below you will find the map for the service location and the contact information should you have any questions.