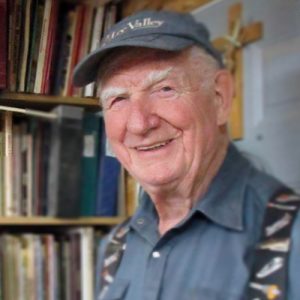 Formerly of Ottawa, Ontario, Bob Ingram passed away on May 29, 2022, in Kelowna, BC. Bob is survived by his wife Anne (née Stuart); children Michael, Heather (Tim Taggart), and Kathy; and granddaughter Chloe Taggart, all of Ottawa, Ontario; as well as his sister Joan Wendland and several relations in The Maritimes. He was predeceased by his former wife Anastasia McDonald in 1987; his son John; his mother Olive and father Harvie; sister Ruth; and brother Angus.

A Veteran of the Royal Canadian Corps of Signals of the Armed Forces, Bob was a member of the Royal Canadian Legion Branch 26 in Kelowna. The motto of the Signal Corps is Velox Versutus Vigilans (Swift, Skilled, Alert). Bob was a devout man of faith. He was very involved with Immaculate Conception Church and was a high ranking member in the order of the Knights of Columbus.

Bob also loved working with his hands and woodworking. He loved crafting bird houses, toys, rocking horses, ornaments, urns, etc. which he crafted many for his family members and friends.

As an expression of sympathy, a memorial donation may be sent to either the Heart and Stroke Foundation of Canada or the BC Cancer Agency – Sindi Ahluwalia Hawkins Centre for the Southern Interior.

Mass of Christian Burial will be held on MONDAY, JUNE 6, 2022, at 10:00 AM (PDT), at ICC with Father Peter Tompkins presiding. For those who are unable to attend in person, a Livestream will be provided by ICC (see below). A recording will be able to be watched shortly thereafter.
Cremation will follow, with interment in Martintown, Ontario.

The Livestream link, provided by the Church, is AVAILIBLE BY CLICKING HERE.

The prayer service for INGRAM, Robert Harvie Alexander Boyce “Bob” is scheduled for SUNDAY, JUNE 5, 2022, at 7:00 PM at located at 839 Sutherland Ave, Kelowna, BC.


The service for INGRAM, Robert Harvie Alexander Boyce “Bob” is scheduled for MONDAY, JUNE 6, 2022, at 10:00 AM (PDT),. Below you will find the map for the service location and the contact information should you have any questions.