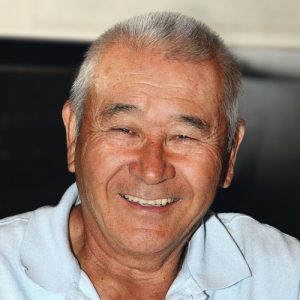 Kenji “Ken” Ito passed away suddenly at the age of 88 on July 8, 2020.  He was born in Rutland, BC on August 2, 1931, and he was predeceased by his wife, Mieko “Mae” (nee Mori) in 2011. He is survived by his daughter Kim (Peter) and grandchildren Stephen, Maraya and Cameron; and sons Ron and David; brothers Morio and Toshiya; and sisters Emie (George) Naito and Nancy (John) Blackmore.  He is also survived by his in-laws Min Mori and Sat (Yem) Mori and many nieces and nephews and their families. Ken was predeceased by his parents Kaoru and Tsuruyo and his sister Keiko “Kay” and his brothers-in-law Tom Naito, Ted Mori, Shorty Mori, Chic Mori, and Carl Nishi, as well as sisters-in-law Em Nishi, Mid Mori, Mari Mori, Tasco Ito and Clara Ito.

Ken was born in Rutland while the family was living on the Cross’s farm.  He attended Benvoulin School, Kelowna High school and Rutland High School, graduating in 1949.  After high school, he worked on the family farm, located near Reid’s corner where they grew and harvested onions.  He married Mae, who was his neighbour growing up, in December of 1964 upon her return to Kelowna after doing work overseas for the Peace Corps in Ghana.  In 1966, he built a house on the family farm where they continued to farm and raised their family.  He volunteered for the Rutland Fire Brigade, and when Rutland was amalgamated with the city of Kelowna, he joined the Kelowna Fire Department in 1972.  He worked alongside some great lifelong friends and colleagues for 19 years in the department, reaching the rank of Lieutenant, and retiring from the department in 1991.  After, he enjoyed attending the monthly lunches with his retired firefighter friends.  He was active in the community, serving on the Board of Directors of the Hinode Home and was a member of the Kelowna and District Association of Japanese Canadians (KDAJC). He was also a ski patroller for Big White for many years.  In 1979, upon the sale of the family farm in Rutland, he built his second house in Ellison where he lived for 33 years.  When Mae passed away in 2011, he moved in with Kim and lived with her and her family until his death.

He had many pastimes, including gardening, motorcycling, playing hockey, fishing, camping, skiing, golfing, watching sports and Heartland on TV, knitting, listening to country music and doing word searches and Fill-In Word puzzles.  He enjoyed creek fishing parties with family and friends, and many fishing trips to the Shuswap and Bamfield and always came home with fish and a new story to tell.  He loved camping with family to many locations around BC, Alberta and the States, including Hornby Island, Egmont, Spokane and matsutake (mushroom) and fiddlehead picking in the Revelstoke and Nakusp areas.  He had a great sense of “Ito” humour and wittiness and his stories and antics always elicited laughter and tears.  He always had pets throughout his life, mostly cats and dogs; Hoss, Shona, Ralphie, Coal, Charcoal, Arthur, Max, A.C. (Another Cat), Cali, Hobbes, Milo, and Stitch, to name a few.

The family wishes to thank Dr. Warrender (ret), Dr. Ketch, Dr. Halperin, and Dr. Pistawka for their ongoing medical care, George Terada who was a lifelong friend and weekly lunch buddy, and for the many family and friends for all their love and support during this most difficult time.

In lieu of koden or flowers, donations may be made in Ken’s memory to the Kelowna Professional Firefighters Charitable Society, www.kelownafirefighters.com/charities or mailed to 1616 Water Street, Kelowna, BC V1Y 1J9 or to a charity of your choosing.

A private family service will be held and once the current COVID restrictions are lifted, a celebration of life will be held at a later date. If you wish to send a condolence, post photos or share a memory please scroll down the page to the area called “Condolences”.