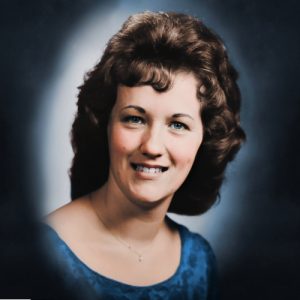 Miriam “Joyce” Johnson, of Kelowna, BC, passed away at the age of 78 years on November 9, 2022. Joyce is survived by her loving husband David; her daughters Suzelle (Michael), Shaunna (Roland), and Saralyn (Tim); grandchildren Maggie & Kelsea, and Zachary (Emily) & Clayton; great-grandchildren Bentley, Westly, & Luna. Joyce is also survived by siblings Dan (Pat) and Judy (Joe); sister-in-law Ardis, and brother-in-law Ivan (Emma); and many nieces and nephews. Joyce was predeceased by her father and mother, Lesley and Ferna Knapp.

Joyce was born in Calgary, Alberta on May 28, 1944, and married David on June 26, 1965. They had met at choir practice and continued “singing together” for 57 years. After finishing High School, Joyce worked for one year as a secretary at the Bank Of Montreal in downtown Calgary. She then attended the Full Gospel Bible Institute for two years. She married David, and they left in the fall of 1965 to travel with Evangelist Dan Moe.

In 1967, they settled in Winnipeg, MB for five years, where their three daughters were born. In 1972, they moved the family back to Calgary to be closer to the grandparents. Joyce took on the job of Church Secretary and worked in that capacity for 22 years. Following this job, Joyce became a receptionist at a Medical Clinic, where she worked for eight years. She retired at the age of 62 and stayed home to be with her mother, who lived with them for four years.

Her home was always open to young people, and about twenty individuals lived with Dave and Joyce over the years as boarders.

In 2012, they moved to Kelowna, BC to retire. They had holidayed in the Okanagan for many years while the girls were growing up and dreamt of one day living there. Joyce had enjoyed the past 10 years living in the Okanagan and gave God thanks for His abundant blessings.

Her favourite scripture was Lamentations 3:22-23 (ESV):
“The steadfast love of the LORD never ceases; his mercies never come to an end; they are new every morning; great is your faithfulness.”

Joyce loved looking after her grandchildren when they were young. She also loved to travel and enjoyed trips to Europe; the Caribbean; Hawaii & other States; Mexico; and extensively in Canada. She enjoyed music, worshipping with fellow believers, baking, reading (she was always known to have “a book on the go”), and the beaches in Kelowna.

In character, she was determined, organized, giving, hospitable, loving, caring, and faithful. Her faith in God never wavered. She was deeply loved and will be so deeply missed.

In lieu of flowers, a donation may be made to the Kelowna’s Gospel Mission in her memory, or a charity of your choice.

A Celebration of Life will be held on SATURDAY, DECEMBER 3, 2022, at 2:00 PM (PST), at NEW LIFE CENTRE (2041 Harvey Ave, Kelowna, BC). If you are unable to attend in person, please join the family online by Livestream at the time of the service (see below).


The service for JOHNSON, M. Joyce is scheduled for SATURDAY, DECEMBER 3, 2022, at 2:00 PM (PST). Below you will find the map for the service location and the contact information should you have any questions.