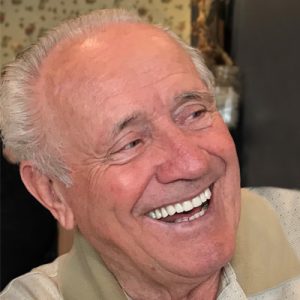 Roger Jolicoeur, beloved husband of Jeannine for 59 years, passed away to be with his Lord on Saturday, February 29, 2020, at the age of 82 years. He leaves behind his children: Diane of Kelowna, BC, J.P. (Sharon) of Abbotsford, BC, Jacqueline (Keith) Poss of Red Deer, AB, and Colette (Peter) Martin of Kelowna, BC; his grandchildren Adam (Danielle), Nicholas, Patrick, Analise (Mirza), Devin, and Brennan; his great-granddaughter, Ivy, and another great-grand baby on the way. As well as his sisters Lucienne (Ephrem), Marie (Roger) and Suzanne (Roland) and his brothers Raymond and Maurice (Delores), he is survived by numerous nieces and nephews, his extended family, and many dear friends. He was sadly predeceased by his brother Eloi, sister Angèle, sister-in-law Claire, brother-in-law Michel, and his parents Emile and Flore.

Roger had a way of lighting up a room and bringing others into that light…a light of genuine interest, contagious joy, and pure love. He will be deeply missed.

In lieu of flowers, donations may be made to the Alzheimer Society of BC, alzheimer.ca/en/bc. If you wish to send a condolence, post photos or share a memory, please scroll down the page to the area called “Condolences”.


The service for JOLICOEUR, Roger is scheduled for Monday, March 9, 2020 at 11:00 am . Below you will find the map for the service location and the contact information should you have any questions.

Our Lady of Lourdes Catholic Church