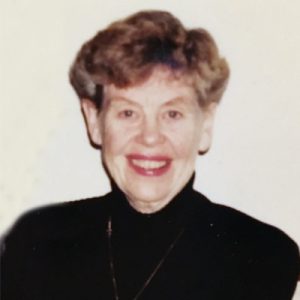 Marion passed away peacefully in Kelowna, British Columbia on December 28 at the age of 90.

Marion was born in Upper Kennetcook, Nova Scotia. She was the youngest child of the late Frederick and Aileen (Clarke) Miller, and sister of Donald Rupert Miller and Claire Bernice (Miller) Garby.

After finishing school, Marion taught in a two-room schoolhouse in Nova Scotia for two years and when she decided teaching was not her calling she and a close friend embarked on an adventure travelling and working in various places in the United States for a few years. When she had enough of the hot weather she returned to Nova Scotia and worked in HR at a Halifax department store where she met her husband, John Donald MacKenzie Jordan (Jack). They were happily married for 34 years, proving that opposites do indeed attract.

Marion and Jack lived in Sydney and Dartmouth Nova Scotia and then moved to Ottawa in 1967. They raised three children (and many more cats) and she worked as a school secretary for the Ottawa Board of Education for many years. Marion was an avid bridge player and loved swimming, cycling, and cross-country skiing. She travelled frequently with Jack and later with friends. In 2013, Marion moved to Kelowna, BC for the warmth of the west and her family there.

Marion is survived by her children, Barbara (Dominic Sotirescu), John (Holli) and Beverly (John Klecker), and grandchildren, Stephanie, Taylor, Connor, and Kate. She was a loving mother and grandmother who made a strong mark on her family. She will be missed.

Marion was pre-deceased by her parents, her brother, her sister, and her husband.

She will be returned to Nova Scotia to be interred in Upper Kennetcook beside her parents, siblings and husband this summer. If you wish to send a condolence, post photos or share a memory, please scroll down the page to the area called “Condolences.”