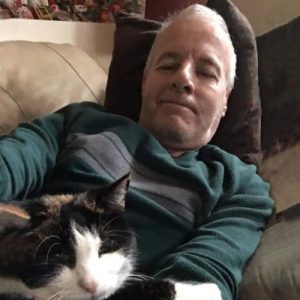 It is with extreme sadness that the family announces the unexpected passing of Donald Kam on Sunday, April 11, 2021, at the age of 54.

Born and raised in Rutland and Westbank, BC, Donny graduated from Mt. Boucherie Secondary School. He then moved to Calgary, AB where he made a career as Manager at the Calgary Co-Op for many years. In 2006, he returned to Kelowna, BC to start his next chapter in life. He then worked at Save On Foods for 10 years, this is where he met his best friend, Steven “Weasel”, with whom he enjoyed hanging out and smoking “fatties” with. They were truly the best of friends, and they spoke daily. Donny was a cat person, he loved his cats Ripper (12 yrs old) and Sadie (17 yrs old), they were like his kids.

As Donny struggled through life with health issues, he was always upbeat and loved a good laugh.  His sister Judy was there for him, through thick and thin, always by his side, and she helped him out greatly.

He will be dearly missed.