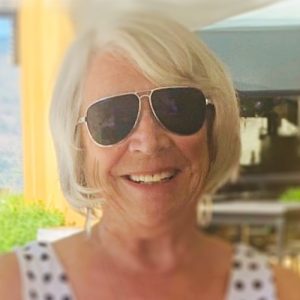 The second daughter of Don and Alice Hill, Fay was born in Regina, SK following her dad’s return from the war. On the bus a day or two later, a stranger asked Don about his new daughter’s name. “Don’t have one yet”, Don said. “How about Elizabeth? After the royal Princess”, the stranger said. And Fay Elizabeth she became.

The family moved to Saskatoon, Wynyard and then Herbert as Don’s career took him from teacher to Principal to Superintendent of Schools. By the time the family (which now numbered three girls and one boy, two other children having died in infancy) moved to Regina in 1961, Fay was ready to shine. She was student Social convener at her high school in Regina, where she dated the President. She was a model, for whom her mother worked from tough Vogue patterns to sew dresses a pretty model required. Going into nurse’s training at Regina General, Fay was valedictorian of her graduating class three years later.

Winnipeg, MB was her first stop as a nurse. She worked in Pediatrics, the beginning of a lifelong love and care for children. In Winnipeg, she met William Dotten working on his PhD in History. They married in June 1969; sadly, Bill died suddenly just over a year later.

Her travels in Europe began. Unwilling to part with a VW van she’d acquired in Canada, she shipped it across the ocean with her. A year or two later, still glued to the wheel of her van, she shipped it back.

It was in Europe that she met the gentleman known as Joseph Bernard Karp. This meeting occurred in Villars, Switzerland, which Fay toured after nursing at Canadian Forces Base Lahr in Germany. Fay’s and Joe’s marriage had officially reached 39 years (from Oct. 15, 1982) by the time of her death, but for Joe and Fay, it was a bond of over 50 years across all manner of side-trips, treks, safaris, seasonal celebrations, holidays and parties, parties, parties. Wherever Joe and Fay went, others would be nearby, ready for good times.

Fay’s nursing career was a mélange of stops and turns. In the 70s and 80s, it consisted of spells nursing on oil rigs in northern British Columbia. There her companion was none other than Bonzer, the Golden Retriever, the first of several doggy blessings in Fay’s life. Once Fay and Joe and Jimbo (Hughes) took possession of their Long street house in Kelowna, BC in 1979, Fay worked as a Pediatrics Nurse at Kelowna General, which was just across the street. Along came Allyson Martine Karp on August 15, 1983.

In the following years, Fay’s nursing interest turned to teaching. She completed a Nursing degree from University of Victoria in the mid-90s, and a Master’s degree in Advanced Nursing at Deakin University in Geelong, Australia, a few years later.

Meanwhile, she’d become a valued member of the faculty in Nursing at University of British Columbia, Okanagan campus.

Most recently, after her retirement from UBCO, Fay found the true blend of nursing, travel, mentoring, people, and family – the things she loved most. She became a leader in taking groups of student nurses to Ghana and Zambia in Africa, and to India. For almost two decades, her leadership (always with a team of like-minded nurses and teachers, and sometimes with Allyson and/or Joe) inspired practical service and deep learning experiences for all involved, the benefits of which will continue for years to come. The Okanagan Zambia Health Initiative (OKaZHI) was one of the great loves of her life. For more info on OKaZHI, or to donate in Fay’s name, please visit okazhi.org.

When we sit up, later than anyone else, with a glass of wine, when we set our table or hang of piece of art on our walls, when we talk pooch-talk to our dogs, when we hold a baby in our arms, when we open our door to welcome a guest, or when we share moments with those we love, we can think of Fay.

We all know that Fay enjoys a good splash of colour. At her celebration of life, we suggest wearing a sprinkle—even a full spray—of bright, bright red.

A Celebration of Life will be held on SATURDAY, NOVEMBER 6, 2021, at 2:00 PM (PDT), at Springfield Funeral Home, 2020 Springfield Road, Kelowna, BC. (Following Covid-19 restrictions, this service will require attendees to show proof of vaccination and a gov. issued photo ID, wear a mask, and the number of attendees will be limited.) If you wish to attend, Please Click Here to Register.

If you are unable to attend in person, please join the family online by Livestream (see below), a recording will be made available to view shortly thereafter.

Send Condolences
Send Flowers or a Sympathy Card
Okanagan Zambia Health Initiative (OKaZHI) was one of the great loves of her life. For more info on OKaZHI, or to donate in Fay’s name, please visit Link: okazhi.org