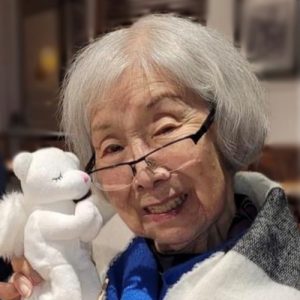 It is with deep regret that we announce the peaceful passing of Nelly Kawano Idenouye Kawahara, on May 6, 2022. She was 97.

Nellie was born on December 14, 1924, and lived on the Coldstream Ranch and in Okanagan Centre. She married Toru Idenouye and gave birth to their son Chris Idenouye after moving to Toronto, ON. She and Toru divorced in 1955.

During her life, Nellie worked as a Medical Secretary and pursued a myriad of interests such as ballroom dancing, opera, Japanese singing and Odori dancing, snow skiing, mushroom hunting, painting, growing vegetables, and even deep-sea fishing.

Nellie was predeceased by her sisters, Alma (Miike) & Grace (Ito), and brother, Melvin Kawano. She leaves her local network of friends and advocates including Mark and Junko Charpentier, niece Barb (Kawano) and Terry, and all the Kawano family.

The family also wishes to extend their gratitude to the staff and volunteers at Hawthorn Park and Orchard Manor in Kelowna.