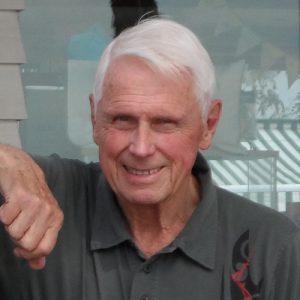 If ever there was a life enjoyed and well-lived, it was that of Dick Kent. He was a well-rounded, extremely interesting and caring man, as well as a wonderful husband, father, grandfather, brother, uncle, and good solid friend.

He will be lovingly remembered and sorely missed by Gail (Spiller) Kent, his wife of nearly 63 years; their daughters, Lisa (Rob) Bannerman of Kelowna BC and Sheryl Kent (Doug Downs) of Calgary, AB; six grandchildren, Ryan (Tori), Bradley and Jordan Bannerman, and Owen, James, and Carol Downs; by his brother, Ron (Lynda) Kent and his sister, Lucille (Alan) Spiller; and other family and extended family members, and numerous friends.

He was born December 11, 1937, in Calgary, Alberta, the son of Hubert Richard and Ina Olive (née Anderson) Kent.

When he was partway through grade one, his family moved to a small farm in Hespero, Alberta, to be near his mother’s Swedish family, while his dad served in the Canadian army. He attended the one-room, Daisy Nook School. He had very fond memories of those early days and, after his family left the farm, he often went back to spend time with relatives during the summer holidays.

Part way through his grade four year, the family moved back to Calgary, where they lived until the end of his grade 10 year. His grade 11 year, at Edmonton’s Eastglen Composite High School, was particularly momentous, because this is when he and Gail met. They were both members of the square dance club. During his grade-12 year at Fort Saskatchewan Composite High School, he joined the school basketball team. When he graduated in 1956, his last five years of schooling had been in five different schools. He would say that his grade-school education had been a mishmash – some years in an academic program, other years in the automotives and Industrial arts. However, he was quick to admit that he’d had some outstanding teachers along the way (some of them memorable characters), as well as some excellent mentors.

He was always busy. He’d enjoyed doing farm chores, and in Calgary, he delivered groceries on his bicycle, for a small grocer in the Mount Royal District, and he stocked shelves at Safeway. He also learned to play the guitar. After moving to Edmonton, he worked weekends at the Edmonton Flying Club as a “hanger boy” where his wages were paid in flying lessons. He received his private flying licence at the age of 17 years.

During the summer of 1956, Marconi Radio employed him to work on the DEW Line. In preparation for the job, he had to take a short course at the Edmonton Air Traffic Control Centre, as well as a meteorological observer’s course. In late August, he and a friend flew to Cape Parry, on the Arctic coast, where they worked for ten months.
When he returned to the city, he learned that the Canadian Government was looking for Air Traffic Control Assistants, similar work to what he had been doing in the North. He started his Air Traffic Control job in June of 1957.

He and Gail were married in 1959, and never was a man more overjoyed than he, when their two daughters were born. Fatherhood, certainly, suited him!

He enjoyed skiing, camping, hunting, and fishing with family and friends; besides his ATC work, he was always into something. For a while, it was carrot farming.

After getting his commercial flying licence, he bought a 1966 Cessna 337A and started his own company, Martin Air Services Ltd., doing pipeline surveillance for his brother’s cathodic protection company. He was an innovative and skilled mechanic – good at repairing most things mechanical and electrical. Even his little English Rover car sported some airplane parts. It wasn’t long before friends, neighbours, and colleagues recognized these skills, and his backyard garage became a mini shop. He never took payment for the time he spent fixing things, but a case of beer or a bottle of whiskey would often show up on the doorstep.

When he retired in 1989, after 32 years with the Ministry of Transport, he was Acting Superintendent of ATC Operations for the Western Region, Air Traffic Services.

Still wanting to keep busy, he did contract work for Evans Consoles, working on ATC console projects across Canada and on Nantucket Island, Massachusetts. He also ran the Edmonton Office for Sego Industries (water well projects and septic systems).

In November 1991, he began working for Hughes Aircraft Co. of Canada (later Raytheon). The company had been given the contract to build CAATS, Canada’s computerized air traffic control system. He and Gail took off for the coast, first living in White Rock and then in South Surrey. The move was an opportunity to make new friends, and the job was interesting and challenging. What was originally a three-year contract turned into a second career.

In 2001, he and colleagues were at the Wright Patterson Airforce Base, demonstrating to the U.S. military a control tower simulator, which Raytheon had developed, when 9/11 happened – a very emotional experience!

When Dick finally retired, he embraced retirement with his usual enthusiasm and immediately joined the Semiahmoo Fish and Game Club. He relished the time spent with other volunteers, working in the fish hatchery and around the grounds. The camaraderie was superb, and the fishing trips to Watch Lake – looked forward to from one year to the next.

It was a fun time – a time to enjoy the garden, feed the birds, travel, play with the grandkids on the beach, spend more time with family and friends, and to celebrate “Martini Fridays”. And the years went by so quickly!

In 2021, he and Gail decided to sell their lovely South Surrey home with the beautiful garden, and on July 10, 2022, they moved into the lower-level suite of their daughter and son-in-law’s new home in Kelowna. Unfortunately, Dick had started to feel unwell. He had always been such a “Mr. Fix-It” himself, so after he was admitted to hospital on September 18, barely able to speak and unable to swallow, he became terribly frustrated when the doctors couldn’t figure out what was wrong and “fix him”. He died in the Kelowna General Hospital on October 7, 2022.