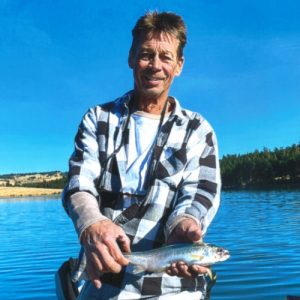 David Bruce Kirbyson, known to everyone as Bruce, passed away peacefully surrounded by family on January 15, 2023, at the age of 62.

Born in Winnipeg, Manitoba, he lived in Calgary, Alberta, Burnaby, BC, and then Bellevue, Washington. His nickname as a child was “Boo Boo” and he had a busy life with his three brothers and two sisters. He was and always has been a character with a voice and a laugh that when you heard it you knew everytime he was around or in a room. From a young age, he had a passion for cars, and this continued all his life.

Bruce met Colleen in 1980 and married her in 1984, and they bought their first home in Coquitlam, BC in 1987, where they raised their two boys Kevyn and Trevor. Bruce worked as an appliance repair man, but then thanks to his dad, he opened and ran Associated Ceiling Cleaners and worked hard to make it a go-to successful company; making many business client friends along the way.

Whether it be at the hockey rink, soccer field, or any other interest they might have, Bruce was very involved with his boys. He loved to camp, fish, boat, and snowmobile, and his boys benefited from it all. He loved to travel with Colleen and did many trips with her and the boys, even buying a place in Phoenix, Arizona in 2008 where they vacationed every year and attended Nascar car racing one of his passions and favorite things to do.

They remained in their house for 30 years, until they retired and moved to the beautiful Okanagan and settled in Peachland, BC. He could not have been happier, living across from a lake full of fish and a community that had everything he wanted. He touched so many lives in this small community because he was always willing to help anyone, and if he could find someone to talk fishing with, have a beer with, or watch the NFL with, he was happy. He was a simple man who loved classic cars, classic rock, and comfort food; and he didn’t like technology.

Bruce’s world revolved around his family, whom he loved more than life itself. Losing his son was a loss that was so hard for him, but he always wanted to be so strong for everyone. His granddaughters were his world, and his special bond as a grandpa and papa with them was immeasurable. Colleen was the love of Bruce’s life and his best friend and they did everything together.

Bruce, you were taken from us far too fast and far too young. Our loss is heaven’s gain, and we hope that you and Key are fishing in God’s lake and are waiting to catch the big one.

A service will be held at a later date.

In lieu of flowers donations to the Kelowna Hospital Foundation, would be appreciated.