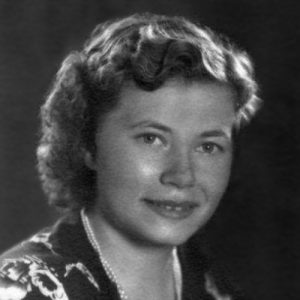 She grew up in a modest home, near Ste. Anne, Manitoba where she would ride to school by buggy, work at farm chores and take pleasure taunting her sister Georgette and three brothers, Louis, Edward and Philippe. She often spoke about having met her husband, Rosaire, at a dance social and seeing that he still had a sales tag on his suit, she introduced herself by asking if “he was for sale”! Wed in 1956, the young couple established their homestead on a dairy and grain farm near LaBroquerie, Manitoba. The neighbours and town folks knew her for her great meals, her sewing talents, yummy homemade preserves, and generous heart in giving away vegetables produced from her large garden. As a matter of fact, she had a green thumb!

Denise and Ros sold the farm in 1977 and moved to Kelowna, British Columbia to try the “semi-retired” lifestyle. Denise’s favorite saying was that she had worked hard enough in her life that she deserved and expected to have her needs catered to. Obviously, she was just joking. She went on to volunteer on various committees to create the first French school program in Kelowna, work at the French Cultural Center, and even attended night school to finish high school! Obviously, she partook in all the fun activities the Okanagan Valley has, including winery visits, camping, and fruit picking. Most of all, she was a proud grandmother of David, Nikki, Colter, Alexandria and Katelyn. Denise discovered a fondness for travelling. With her husband Ros, they travelled across Canada, became snowbirds and took several cruises. She was blessed to have been able to continue travelling to Hawaii and several times to Mexico after Ros passed away.

In 2003, Denise lost her daughter, Simone to cancer. She always said that losing a child is one of the hardest ordeals for a mother. In 2010, Denise had a stroke and life required some lifestyle adjustments. Sadly Ros passed away in 2013. Denise’s succeeded to make herself a new life, new friends and new activities. In the last years, Denise enjoyed an independent lifestyle with friends doing the things she loved.

Special thanks for the excellent care given to Denise by the Kelowna General Hospital and BC Interior Health.  Denise was cremated and an interment will be held at a later date for close family as per her request.  Denise would like to be remembered for her ability to deliver a good joke and make people laugh. If you see a good cause or foundation that follows Denise’s nature please support it.