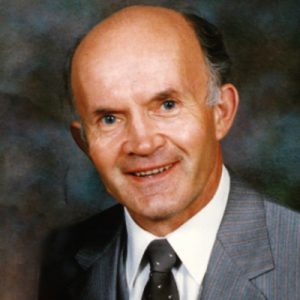 Reinhard “Roy” Klammer died peacefully, in the presence of his children, on January 5, 2021.

Roy was born in 1931 near Risweg, Poland, he grew up on the farm, the oldest child of seven.  The family became permanently separated from their father during World War II.  During those difficult war years on the farm, he was only able to receive an elementary school education. In 1953, He left Germany, with his sister Irene, by ship for Canada.  They arrived in Montreal, QC, then took the train to Vancouver, BC.

Roy met Linda Rosner in fall 1954, and  they married in May 1955. They were blessed with three children: Esther, Garry and Brian.

Roy always worked hard, from his childhood on the farm, to the sawmill, and helping on the orchard once retired.  His work ethic and service set a strong example for us as a family.  He also spent much time volunteering at Grace Baptist Church in Kelowna, BC. Even though he only had an elementary education and worked as a laborer, by living a simple and content lifestyle, he provided for his family, gave to needs, and supported his church and ministries.  He modeled contentedness, peace and generosity.

Roy prayed regularly for his family, many people, and situations.  He was always loving and tender to his wife – especially during the final days of her cancer battle.  He lived a life of integrity, commitment and faithfulness.

He was an avid walker, reader, and  enjoyed fishing with his friends.  When he was diagnosed with Progressive Supranuclear Palsy (PSP) in 2018, he quickly lost his ability to walk, read, and lift the fishing boat, so sadly those simple joys were no longer possible for him.  As his physical needs grew, he moved from the Village at Mill Creek, to Three Links Manor.  The staff at both those facilities were tremendous with their care.  Even as his dementia grew worse, he maintained his gentle, peaceful, content spirit.

He is lovingly remembered and honoured by his family: his children Esther (Tapio) Itkonen, Garry (Gayle), and Brian (Carol); siblings Arnold, Adoline, Herbert, Lydia and Bruno; grandchildren Lauren, Darrell (Kira), Jason (Elizabeth), Ian (Sophie) and Aric (Desire); and great-grandchildren Johnathan, Lily, and Summer; and many other relatives and friends. He was predeceased by his wife Linda; sister Irene; and great-grandchild Bruno.

A Funeral Service will be held to honour Roy, due to the current pandemic restrictions it will be by invitation only. However, the family would like to invite all who want to pay their respects to join by Livestream on Friday, January 8, 2021 at 1:00 pm. A recording will be made available to view shortly thereafter. (below)

In lieu of flowers, please consider making a donation in Roy’s memory to a charity of your choice.