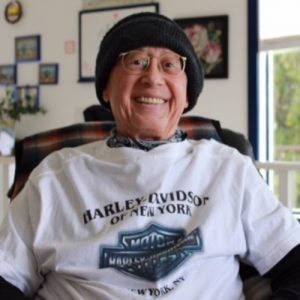 On October 28, 2021, at the young age of 67, Dwight passed away peacefully at the Kelowna Hospice House after a hard-fought and courageous battle with cancer. His loving wife of 48 years was by his side, as always.

Dwight was born in Edmonton on January 30, 1954 to Helen and Joe. As a child he enjoyed spending time on his grandparents farm, participating in Boy Scouts and playing hockey. He was a star on the ice, fastest skater, hardest shot and the best fighter. As the oldest sibling he was a loving big brother to Debbie, Penni, Joey and David.

His teenage years were adventurous which cemented lifelong friendships. It was also at this age that he developed an interest for motorcycles, cars and trucks.

In the early seventies Dwight’s family moved to Kelowna. He met Deb (daughter of Ted and June) at a dance in Rutland. On June 28, 1973 he married the love of his life. Their marriage was blessed with two children which were his pride and joy.

Dwight was a carpenter by trade, the best summer of his life was in 1985 when he built his family home where he lived for over 36 years.

Dwight had many loves and always had a project on the go. He spent many days in his shop rebuilding his 1942 Harley Davidson and his 1964 Pontiac, Parisienne.

He loved a good joke and had the most contagious smile and laugh. He enjoyed going for coffee and meeting new people. Dwight would lighten and brighten your day.

He loved to feel the warmth of the sun. On beautiful days he could quite often be found cruising in his convertible or at Kaloya Park playing his guitar. He loved rock n’ roll and wished he would have started a band with his brothers and sisters.

He cherished family dinners (with lots of potatoes) and game nights.

Even in the most challenging days of his illness, he never failed to show his love and gratitude to those around him. Dwight loved life and was devoted to his family. He was so grateful for everyone’s love and support and thoroughly enjoyed receiving texts and pictures and being part of everyone’s lives.
Dwight will be lovingly remembered by his wife Deb; children Nathon (Ljubi), Shawntell (Ryan); granddaughter, Alexis, his best snuggle buddy Pixie along with countless family members and friends.

In lieu of flowers donations can be made to the Kelowna Hospice House.

A celebration of life will take place at a later date.