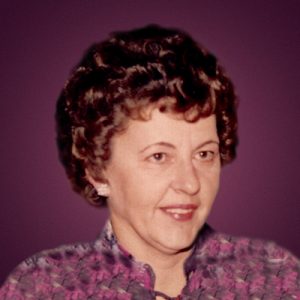 It is with sadness that we announce the passing of Janet Rose KNORR (née Selzler) on February 25, 2020 at Central Okanagan Hospice House at the age of 82 years. A life-long resident of Kelowna, Janet was born on August 31, 1937, the first of 3 daughters to Pete and Emily Selzler. After graduating from Kelowna Senior Secondary in 1955, Janet attended Herbert’s Business College. She then began her working career as a secretary at Chapman’s Van Lines, where she met her husband Theodore (Ted) Knorr. Janet and Ted married in 1957 and went on to have 2 children, Sandra and Derek.

Janet and Ted built a home in Glenmore and lived there until 1979, when they purchased a vineyard in the Belgo area of Kelowna on which they built a new home. Janet worked in retail at Eaton’s, and in the children’s wear department at The Bay for over 20 years, as well as with Ted in the vineyard.

Janet and Ted took ballroom dancing lessons and were known to impress onlookers at family weddings and community dances. They were also proficient bowlers and brought home several trophies. Janet’s hobbies were baking, gardening, word games and puzzles, playing cards, camping at the Kettle River Campground, and fishing for Kokanee in Okanagan Lake, although she didn’t like to clean them or eat them. Following her retirement from The Bay, she enjoyed doing jigsaw puzzles and spending time at the casino with family and friends.

Janet is survived by her husband Ted and her 2 children, Sandi Walters (Peter) of Victoria and Derek Knorr of Kelowna, as well as by her sisters Beverley Wostradowski (Bill) and Sharon Hallam (John), and several nieces and nephews. She was predeceased by her parents, Pete and Emily Selzler.

The family would like to express its thanks to the physicians, nurses and staff at Kelowna General Hospital and Central Okanagan Hospice House for their care of Janet and to the staff of Springfield Funeral Home for their gracious assistance and support.

A Mass of Christian Burial will be celebrated on Wednesday, March 4, 2020 at 10:00 am at Corpus Christi Roman Catholic Church, 750 Rutland Road North, with Reverend Pat Monette officiating. Reception to follow at Corpus Christi Church Hall.

Interment will take place on Thursday, March 5, 2020 at 11:00 am at Kelowna Memorial Park Cemetery, Legacy Gardens.

In lieu of flowers, if desired, donations in Janet’s memory may be made to Central Okanagan Hospice House, 2035 Ethel Street, Kelowna BC V1Y 2Z5.


The service for KNORR, Janet Rose is scheduled for Wednesday, March 4, 2020 at 10:00 am . Below you will find the map for the service location and the contact information should you have any questions.