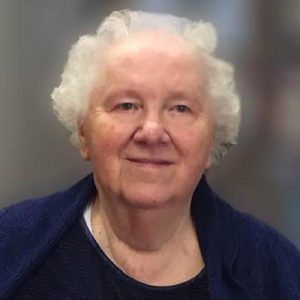 Betty Koehn (née Klassen) was born in Sagradovka, southern Russia on April 19, 1929.  She passed away peacefully at Cottonwoods Care Centre in Kelowna, BC on February 5, 2020 at the age of 90.

The family immigrated to Canada while Betty was a baby, escaping political turmoil and religious persecution; it had been a difficult start to life.  The family settled in Culross, Manitoba, later moving to Winnipeg.  Betty gave her heart and life to Jesus Christ as a young teen and was baptized into North Kildonan MB Church.  After high school, she worked at Eaton’s department store.  She married David Koehn in 1949 and they moved to Yarrow, BC in 1950.  They were blessed with a daughter, Carol, and a son, Gordon.  She was a great homemaker and loved being a mother, teaching her children many skills.  Her yeast buns were famously light and fluffy, as were her butter-horns and cinnamon rolls.

When Betty was 26 years old, she lost her father to Huntington’s Disease.  Later, 3 brothers and 1 sister were affected by the disease, which brought her great sorrow.  Though she and one brother were spared, the sorrow she felt for the others and their children weighed heavily on her.

In 1973, her first grandchild, Michael, was born.  She loved being a grandma and enjoyed helping as more baby boys followed.  Those were special times in Yarrow.

Betty served faithfully with her husband Dave as ordained deacons in the Yarrow MB Church. She was a compassionate visitor to the sick, having experienced more than her share of illness over the years.  She was known as a caring, well-spoken encourager with leadership skills.  Betty also enjoyed giving skincare classes and welcoming newcomers to Yarrow through ‘Royal Welcome’.  Betty and Dave enjoyed travelling south to California and Arizona, sometimes with friends and other times with relatives.

In 1989, they moved to Kelowna.  Dave built their new home and she enjoyed decorating it and hosting friends and family there. They became members of Willow Park Church.  Family was everything to Betty.  She prayed for and loved her 5 grandsons and their families.  Our family will be missing a prayer warrior. When Betty and Dave had been married 60 years (in 2009), the family gathered at Gardom Lake Bible Camp for a celebration, reminiscing while viewing old slides and photos.

In 2011, they moved into assisted living at Sunpointe Village.  In 2015, her husband David passed away after a short battle with cancer, and she missed him deeply; they had been married almost 66 years. Though lonely, her faith sustained her, and she stated, “God has never disappointed me”.  In 2017, she suffered a stroke and moved into full care at Cottonwoods Care Centre.  In November 2019 she had a heart attack and cancer was discovered.  Our family is grateful to have had almost 3 months’ time with her before she peacefully passed away on February 5th.

Much appreciation goes to Dr. Larry Bobyn, the staff at Sunpointe Village, KGH, and Cottonwoods Care Centre for their excellent attentive care.

She will be sadly missed by her children and their spouses, Carol (Jim) Stobbe and Gordon (Bonny) Koehn; 5 grandsons and their spouses Michael (Kristine) Stobbe, David (Sara) Stobbe, Graham (Mandy) Stobbe, Ryan (Pamelyn) Koehn and Dallas Koehn; and her 12 great-grandchildren. Betty was predeceased by her husband David Koehn; her parents Benjamin and Katerina Klassen; her 4 brothers Cornelius, Jack, Wally, and John; her sister Kay Isaak; and one of her great-granddaughters, Leah Stobbe.

A Funeral Service will be held on Tuesday, February 18, 2020 at 11:00 am at Northview Community Church, 32040 Downes Rd, Abbotsford, BC.  If you wish to send a condolence, post photos or share a memory, please scroll down the page to the area called “Condolences.”


The service for KOEHN, Elizabeth “Betty” is scheduled for Tuesday, February 18, 2020 at 11:00 am. Below you will find the map for the service location and the contact information should you have any questions.