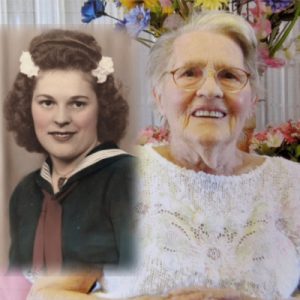 On December 21, 2019, Jean Kostaschuk passed away in Kelowna at age 97. She was born on October 7, 1922 in Rose Valley, Saskatchewan, one of eight children, to George and Annie Hoar. Jean was one of the few women of her generation to graduate high school and during World War 2 she helped the war effort by assembling aircraft in Ontario. She moved west to Kelowna after the War and worked in a downtown restaurant where she met Nick Kostaschuk of Endeavour, Saskatchewan. On May 4, 1948 they were married in Endeavour and spent several years in Hudson Bay, Saskatchewan, where Ray was born. In the early Fifties they moved to Atikokan, Ontario and Jean gave birth to Marina and Rod. In 1969 the family returned to Kelowna and she worked for many years at the Laurel Packing House.

Jean was a passionate curler, golfer, and a life-long fan of the Toronto Blue Jays, especially Jose Bautista, and the Canucks, particularly the Sedins. She enjoyed mystery novels, Wheel of Fortune, Jeopardy, singing hits from the Forties, and was a tireless walker, even in her eighties. Jean was a kind, gentle and generous person and, with the exception of a few obviously biased referees and umpires, rarely said a harsh word to anyone.

Jean was preceded in death by Nick and is survived by Ray, Marina and Rod and seven grandchildren and two great grandchildren. Jean’s family would like to thank Dr. Hart and the exceptional team at Mission Creek Landing for their respectful care in her final years. Memorial donations may be made to Kelowna Women’s Shelter and a celebration of life will be held in Summer 2020.
She was a wonderful and supportive mother and her family and all who knew her will miss Jean.

Service
Celebration of Life will be held in Summer 2020.


The service for KOSTASCHUK, Jean is scheduled for Celebration of Life will be held in Summer 2020.. Below you will find the map for the service location and the contact information should you have any questions.