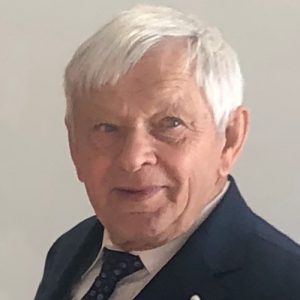 Alois moved with his family, shortly after WWII, from Tarnau to Voigtholz, Germany, where he grew up learning the trades of beekeeping, farming, and landscaping. In 1960, he immigrated to Canada “the land of opportunity”, making his way to Edmonton, AB where he met his wife, Adelheid “Heidi” Markeli, married and started his family of five children. He eventually established his own company involved in various construction projects, which led to an opportunity to own and manage a marine business in Spruce Grove, AB for almost twenty years, and an automotive business in Edmonton for another dozen years. While in Spruce Grove, he managed to get elected and serve time on town council for a term. Alois and Heidi moved to Summerland, B.C. to “retire” in 2008.

Dad’s legacy is his family and his resiliency for life. We were blessed to have him as a father and “Opa”. Dad always took satisfaction in his work (“hat immer spass gemacht”) and was very dedicated to whatever project he had at hand, yet he took the time to ensure we had fun at the cabin, teaching us skiing and visiting relatives (Germany). In his later years, he took great pleasure playing his violin with various musical groups (including the “tune-agers”) for seniors’ care homes. He also treasured and enjoyed gatherings with his friends at the German Club in Kelowna, BC and his neighbours in Summerland.

A Celebration of Life will be held at the Kelowna German Club (at a later date) when Covid restrictions ease up. In lieu of flowers, donations may be sent to any cancer research of your choosing.