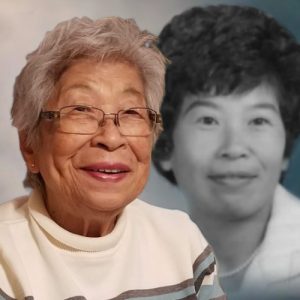 It is with deep sadness that we announce the passing of our beloved sister, aunt, and friend Shigeko ‘Sugar’ Kurahashi on April 14, 2021.

Shigeko lived a wonderful life. Born on January 12, 1930, to Hisakichi and Tsuru Tanaka in Wakayama-ken, Mio-mura, Shigeko was a loving daughter and kind sister. As a young woman, she moved to Tokyo to work at the Tachikawa U.S. Air Base. She also studied ikebana, earning a teacher’s certificate. Shigeko married her love, Yukio ‘Sam’ Kurahashi, and the young couple lived in 100 Mile House, BC for several years before settling permanently in idyllic Westbank, BC. Shigeko enjoyed many years at the Westbank Packinghouse where she formed precious lifetime friendships. Sugar and her dear friends Bernice, Marg, and Irene traveled to Reno twice and Spokane several times to watch ice – skating shows. For the past 20 years they also enjoyed monthly Boston Pizza lunches. When health issues prevented Sugar from attending, her friends brought Boston Pizza to her home. Sugar also cherished long chats, laughs, and precious times with Nobby, Aki, Trudy, Vern, Betty, Bruce, Nan, Toyoko, Toshiko, Anita, and so many other wonderful friends.

Shigeko also maintained a strong connection with her Japanese heritage. She enjoyed the New Year’s Day celebrations and prepared traditional dishes to share with family and friends. She enjoyed reading Japanese novels, writing in her diary, watching TV Japan, hunting for matsutake, and sharing onigiri bento. She also maintained a close association with the Buddhist temple.

Sugar possessed incredible gardening, quilting, sewing, crocheting, and other skills. Her generosity with these skills and her laughter, kind heart, and sense of humour endeared her to everyone fortunate enough to know her.

We would like to extend our heartfelt gratitude to the staff of Kelowna General Hospital who provided care and compassion to Shigeko.

In lieu of flowers or koden, the family would appreciate a donation to the Heart and Stroke Foundation or the Kelowna Buddhist Temple in memory of Shigeko Kurahashi.

A private Graveside Service will be held at the Kelowna Memorial Park Cemetery. The family would like to invite all who want to pay their respects to join online by Livestream on THURSDAY, APRIL 29, 2021 AT 10:30 AM PST.  A recording will be made available to view shortly thereafter.